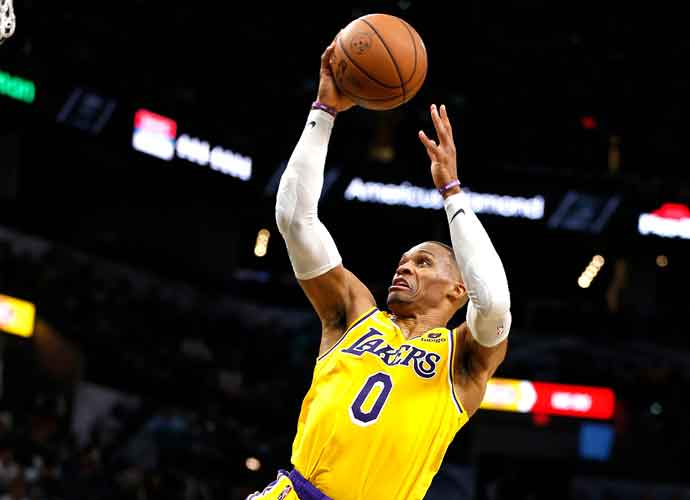 SAN ANTONIO, TX - OCTOBER 26: Russell Westbrook #0 of the Los Angeles Lakers drives to the basket past Dejounte Murray #5 of the San Antonio Spurs in the first half at AT&T Center on October 26, 2021 in San Antonio, Texas. (Photo by Ronald Cortes/Getty Images)

It didn’t take long for chemistry concerns on the Los Angeles Lakers roster to manifest themselves on the court. During an uninspiring performance in a preseason game against the Minnesota Timberwolves Wednesday, Russell Westbrook was noticeably withdrawn on multiple occasions and appeared to be openly dismissive of teammate Patrick Beverley during a team huddle.

When the Lakers first traded for Beverley in August, many immediately questioned how the new acquisition would function with other players on the roster. He and Westbrook have consistently had disagreements for the better part of a decade, making the pair’s dynamic especially important for those trying to assess the team’s future.

Westbrook, who scored five points to go along with four assists and three rebounds in the contest, was visibly frustrated on multiple occasions. When Beverley called his teammates together for a huddle, which stars LeBron James and Anthony Davis readily joined, he motioned to Westbrook multiple times but he refused to come closer.

The moment caught Jake Paul’s attention, who posted his thoughts on Twitter.

Lakers need to pull the plug and trade Russell Westbrook for their sake and for The Brodie’s sake.

He’s a star and needs his own team.

This may just be a very keen analysis of a few seconds of a basketball game, and Westbrook and Beverley have reportedly been talking for some time in an effort to get on better terms.

Westbrook also explained to reporters Thursday that he was talking to coaches on the sidelines and that the viral video was edited to paint him in a bad light. Based on what is already understood about their relationship, however, moments like these do seem more important for a team looking to overcome internal issues and capitalize on a very talented, underperforming roster.

Russell Westbrook on all the huddle speculation: pic.twitter.com/kx4cd50pPB

After the game, Westbrook took to social media, posting an Instagram story which only said, “1 Peter 5:8,” a clear reference to a verse in the Bible which says, “Be sober, be vigilant; because your adversary the devil, as a roaring lion, walketh about, seeking whom he may devour.”

Westbrook and Beverley are both household names in the NBA community, two guards with vastly different skillsets and constantly warring attitudes. Westbrook has gained a reputation as one of the most prolific scorers in NBA history, averaging a triple double in four of five seasons between 2016 and 2021. Meanwhile, Beverley is known as a scrappy defender with a polarizing outspoken demeanor on and off the court.

It’s still unclear if the Lakers’ guards can co-exist on the same roster, one featuring James and Davis that many believe can still win a championship. If a peaceful situation is impossible, however, then the organization would likely have to consider options for parting ways with Westbrook — and soon.