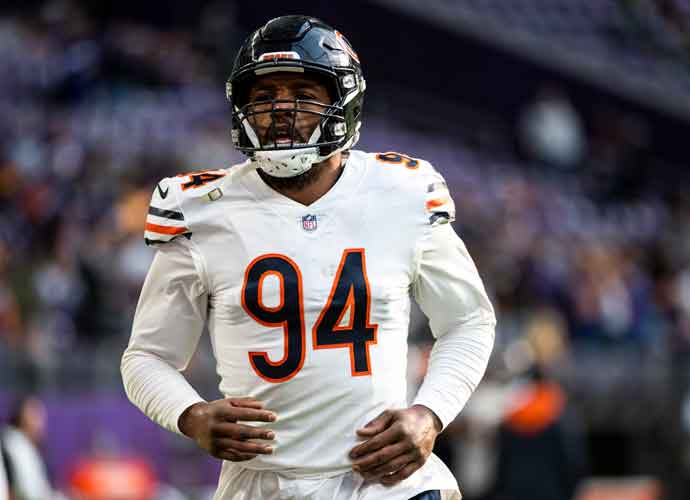 MINNEAPOLIS, MN - JANUARY 09: Robert Quinn #94 of the Chicago Bears warms up before the game against the Minnesota Vikings at U.S. Bank Stadium on January 9, 2022 in Minneapolis, Minnesota. (Photo by Stephen Maturen/Getty Images)

Mandatory minicamps across the league are taking place, with rookies and veterans alike getting the first chance to practice together before the extended summer breaks begin. Some players have chosen not to attend minicamp citing concerns due to contracts, trades or just plain unhappiness. Bears star pass rusher Robert Quinn was one of the few players in the league who skipped the mandatory camp.

Head coach Matt Eberflus voiced his concern at Quinn’s no-show. “We hoped he would be here. He’s not,” Eberflus said. “[General Manager] Ryan [Poles] and his staff are going to work through that. We’ve talked to him, but in terms of being here, not being here, I’m going to leave that all up to Ryan.”

Quinn has been one of the better defensive players in the NFL. The 32-year-old is coming off one of the best seasons of his career. In 2021, he registered 49 tackles, 19 tackles for loss, and an absurd 18.5 sacks, his best mark since having 19 sacks in 2013 when he was with the Rams, and the Bears franchise record. His numbers were good enough to earn him his third Pro Bowl nod and a second-team All-Pro selection.

Robert Quinn was fantastic last year, and his trade value will likely never be higher than it is right now.

I think he’ll be high in demand as a productive pass-rusher on the trade market. If the #Bears get a 3rd and clear up his contract, it might be best for both sides.

It is unclear what Quinn’s reason for not attending minicamp may be. He is entering the third year of a five-year, $70 million contract he signed in the 2020 offseason. Quinn’s name has been in trade talks this season as the Chicago Bears are expected to have one of the worst rosters in the NFL this upcoming season.

As of now, Quinn is reportedly training on his own. Teammate Eddie Jackson said he’s not worried about Quinn’s absence and expects him back eventually. “It’s Rob, He’s been in the league for a while, and I’m pretty sure he has his reasons and we’re just waiting on him to come back. We know he’s going to come back in tip-top (shape),” Jackson said.