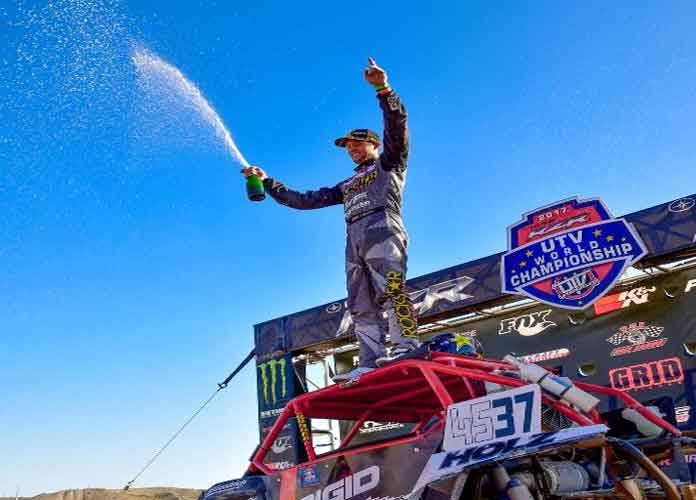 Off-Road Racer RJ Anderson: How To Pull The… by uSports

Anderson — a Riverside, California resident who began racing at the age of 14 — sat down for an exclusive video interview with uSports in which he discussed, among other topics, his secret to executing the perfect post-race “victory donut.” Donuts are loops off-road drivers make with their tires in order to leave circles engraved in the dirt to mark their circuit.

The 2015 Off-Road Hall of Fame Nominee for Short Course Rising Star also credited his crew for helping him perform this trick. “Winning takes the right team behind you,” he added.

Anderson is also renown for his viral videos about the latest racing technologies, clips that have garnered over 30 million views. Among the videos the youngster has helped produce are ones that explain the benefits of driving with tires like the BFGoodrich All-Terrain T/A  KR2 or KO2.

Additionally, Anderson has become the face of the growing Polaris RZR brand.

The young driver also became poetic while he explained the significance executing donuts holds for him.

“I guess, pulling a donut is almost like a work of art to me, and it’s an expression of all the hard work and everything that everyone’s gone through in the race,” Anderson said with a chuckle before finishing with a joke. “Being able to just display it as your emotions in a way of art, it’s definitely not your traditional glazed donut out there.”

Among the other vehicles Anderson and his team drive are the Pro Lite with a Casey Currie Motorsports Chassis and a 360cu-in Mopar V8 engine sealed by Kroyer, and the Pro 2 with a RPS/ RJ37 Chassis and a 440cu-in Kroyer Small Block Ford engine. His younger brother Ronnie typically drives the Pro Lite.

Ronnie and Anderson’s niece Shelby, both of whom look to RJ as a role model, both compete in the Modified Karts class. Anderson has a great relationship with both of them, although he says it doesn’t get to the point where they distract him.

Anderson will next be competing at Utah Motorsports Campus in Tooele, Utah, from June 24-25, and then at Lucas Oil Speedway in Wheatland, Missouri from July 22-23. Both events are part of the 2017 Lucas Oil Off-Road Race Series.

MMA Fighter And Stuntman Alain Moussi: How To Beat A Larger Opponent