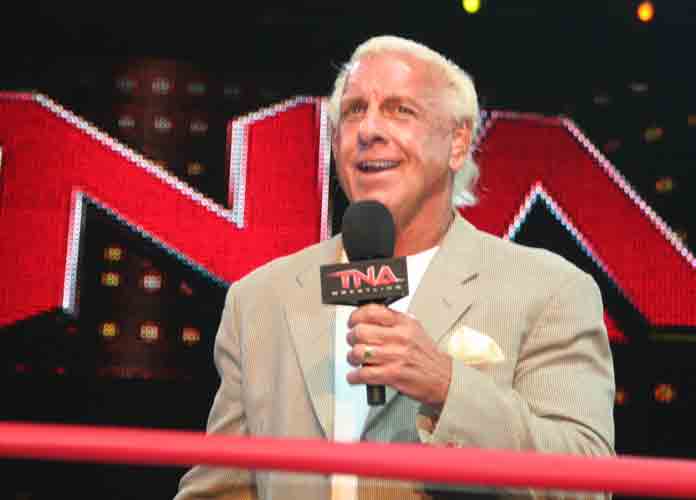 One of the most polarizing and electric wrestlers ever has stepped into the ring for the final time. Ric Flair ended his wrestling career on top after a win at Nashville’s Municipal Auditorium.

The 73-year-old emerged victorious in a tag-team match alongside his son-in-law Andrade El-Dorado against Jay Lethal and Jeff Jarrett.

Flair ended the night with an iconic finishing move, a figure-four leg lock.

He came into the match with energy, doing his iconic strut, leading the crowd in a chant, and even bleeding from his temple, looking like his prime 1970s-80’s form.

“I had one of my best matches of my career here with Ricky Steamboat,” Flair said. “All my family is here. We made jokes about me being married five times. All the kids are here. One wife, but all my granddaughters. My friends are here. I swear to God, guys. If I didn’t have enough pressure on me tonight, f—ing Kid Rock walked into the locker room tonight.”

After a 30-minute match that seemed endless, Flair landed hits and kicks just like his usual self. Andrade then passed brass knuckles to Flair who landed a shot on Jarrett and then finished him with the leg lock.

Andrade, Flair’s son-in-law, said that this match was one of the biggest he’s ever been in following the conclusion. “This match is the most important of my career. This is unbelievable. I don’t even have words for this. [Flair] feels better than guys 20 years old. He’s an inspiration to me,” he said.

Flair is one of the greatest wrestlers of all time with 16 world titles. He was inducted into the WWE Hall of Fame twice.

His swagger has been imitated all throughout wrestling and Hollywood.

He even has his own namesake hip-hop song named after him, “Ric Flair Drip,” recorded by rapper Offset in 2017.

I don’t have words!!!
Thank you Sir @RicFlairNatrBoy pic.twitter.com/7FW09sjMF8

Jarrett, who also helped Flair get ready also shared his emotion after the match. “It’s his last one. If anything goes wrong, it’s on me. It’s on others. I’m so damn happy for Ric, I don’t know what to say. … As a spectator, y’all watched it and went home tonight,” Jarrett said. “When you’re participating, it’s a whole other level of pressure that I’ve never been under.”

“The Nature Boy” got his proper send-off.