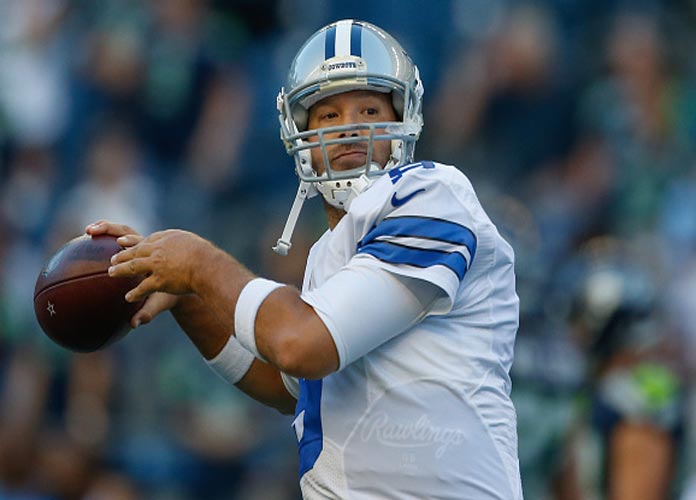 Tony Romo has been suffering recently after sustaining a back injury during the preseason.

Now that rookie Dak Prescott has replaced Romo as the Dallas Cowboys‘ starting quarterback for the foreseeable future, Romo could potentially be headed to another team.

Which team? The Denver Broncos, according to NFL Media Insider Ian Rapoport. This could happen, Rapoport says, if general manager John Elway decides that neither Paxton Lynch nor Trevor Siemian is quite ready to be the Broncos’ long-term starter.

Other options for Romo, 36, reportedly include the Chicago Bears, New York Jets, Arizona Cardinals and Buffalo Bills, depending on several factors. ESPN’s Adam Schefter also mentioned these teams as possible destinations for Romo, although not everyone agrees.

CBS Sports’ Jason La Canfora vehemently refuted this report, saying it’s “hardly out of the question” that Romo remains in Dallas. Romo began wearing a back-brace shortly after he was hit from behind during a preseason matchup against the Seattle Seahawks.

Once the Cowboys officially trade him, they will still have to deal with about a $20 million salary-cap hit. Romo will have significant say in the matter given that he will need to renegotiate his deal. He, essentially, could veto any move.

The Broncos currently have $9.7 million in available cap room, but 21 players are scheduled to hit free agency this offseason, including several starters.

The Cowboys have fared well this season under Prescott, leading the NFC East and going 9-1 to hold the best record in the NFL. Dallas’s only loss came in their season opener against the New York Giants, whom they are slated to face again on Dec. 11 at MetLife Stadium. On Sunday, the Cowboys defeated the Baltimore Ravens 27-17.

The Cowboys will next host the Washington Redskins (6-3) on Thursday for Thanksgiving.

SEATTLE, WA – AUGUST 25: Quarterback Tony Romo #9 of the Dallas Cowboys warms up prior to the preseason game against the Seattle Seahawks at CenturyLink Field on August 25, 2016 in Seattle, Washington. (Photo by Otto Greule Jr/Getty Images)