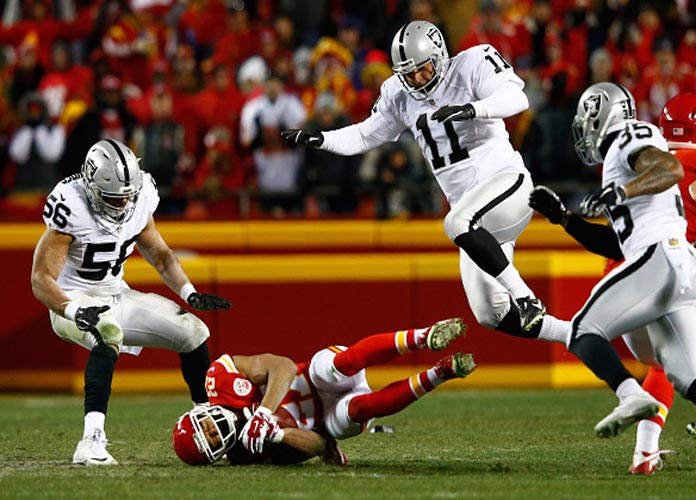 KANSAS CITY, MO - JANUARY 3: Tyvon Branch #27 of the Kansas City Chiefs recovers an on-side kick as kicker Sebastian Janikowski #11 of the Oakland Raiders leaps to avoid him at Arrowhead Stadium during the fourth quarter of the game on January 3, 2016 in Kansas City, Missouri. (Photo by Jamie Squire/Getty Images)

Oakland Raider owner Mark Davis will travel to Las Vegas on Thursday and is prepared to make a big move for the team by relocating the franchise to Vegas if financing for a new stadium should be approved, according to a report.

Davis is reportedly set to attend a meeting on Thursday to discuss financing a $1.33 billion stadium on the campus of the University of Nevada-Las Vegas.

“It’s huge because the committee sees (the Raiders) are serious,” a source told the Los Angeles Daily news. “If (the committee) approves the funding, there will be no stopping the train.”

Funding approval is a key issue, because public funds are expected to pay for over 50 percent of the stadium. The Las Vegas Sands casino group and Majestic Realty, who are expected to join Davis for Thursday’s meeting, developed a funding proposal in late March that reportedly called for about $780 million of the $1.33 billion to be publicly funded.

Initial plans for the stadium’s construction call for a 65,000-seat dome that could be built with a retractable roof at an extra cost of about $55 million, according to the latest cost model created by the Sands. The new stadium is tentatively planned to contain 100 luxury suites and 6,000 club seats.

The NFL has fervently opposed any team moving to Las Vegas in the past because the city allows gambling on pro football games. However, the league has now softened its stance, and commissioner Roger Goodell is leaving the possibility of a move to Sin City open.

“Ultimately, it’s the ownership’s decision,” Goodell said. “It requires 24 of the 32 owners to approve any relocation to any market.”

The NFL’s owners voted in January to reject the Raiders’ attempt to move to Los Angeles, allowing the Rams to relocate there from St. Louis instead and giving the San Diego Chargers the first opportunity to join the Rams if a new stadium isn’t built in San Diego. NFL owners also, however, view Las Vegas as a brand new source of revenue growth.

The report also adds that the Raiders have many compelling reasons to move to Las Vegas. The franchise would maintain its connection to its base of fans in California and develop a whole new base of fans in Las Vegas.

Dallas Cowboys owner Jerry Jones does not want to see the Raiders move to San Antonio, while Rams owner Stan Kroenke and Chargers owner Alex Spanos would prefer to keep the Raiders out of both the Los Angeles and San Diego markets.

The Raiders have also reportedly considered relocating to San Antonio, Los Angeles, and San Diego, if the Chargers move from San Diego to Los Angeles. The Chargers have until Jan. 15, 2017 to make their decision.

#Raiders owner Mark Davis will have another meeting with Las Vegas officials today regarding a new stadium, per Los Angeles Daily News

KANSAS CITY, MO – JANUARY 3: Tyvon Branch #27 of the Kansas City Chiefs recovers an on-side kick as kicker Sebastian Janikowski #11 of the Oakland Raiders leaps to avoid him at Arrowhead Stadium during the fourth quarter of the game on January 3, 2016 in Kansas City, Missouri. (Photo by Jamie Squire/Getty Images)