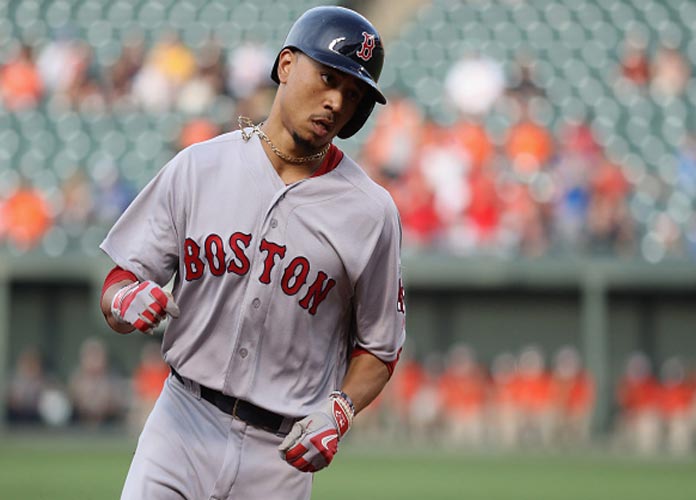 Betts also went deep in his first two at-bats in the Red Sox’s 13-9 loss to the Orioles on Wednesday, thus becoming the first player ever to hit a homer in each of the first two innings of consecutive games.

It was his third leadoff homer of the season and the fifth of his career. Betts scored on the second pitch of the game off right-hander Mike Wright, sending the fastball flying to right-center field.

The 23-year-old also tied a major league record with five homers in a span of seven at-bats. The last player to achieve this feat was Josh Hamilton, who did it with the Texas Rangers on May 7-10, 2012.

“I didn’t know that. Tying is pretty cool,” Betts said. “[Hamilton] is pretty good. To tie someone like that is pretty special.”

Betts also added that he doesn’t view himself as a power hitter, despite scoring 14 homers, behind David Ortiz for the team lead.

“I see myself as a gap-to-gap doubles hitter,” Betts said. “They’re just going over the fence right now.”

Betts admitted he surprised himself by hitting the first opposite-field homer of his career on Tuesday night.

“He’s swinging the bat great,” said second baseman Dustin Pedroia. “He’s been a force all year for us. He’s been fun to watch. Hopefully he continues to do what he’s doing because it’s pretty exciting.”

The youngster is only the third Red Sox player with five homers in a two-game span, the two others being Nomar Garciaparra (July 21-23, 2002) and Hall of Famer Carl Yastrzemski (May 19-20, 1976). Betts is also the second-youngest player ever to accomplish this feat, trailing only Bryce Harper, who did it May 6-8, 2015 at age 22 with the Washington Nationals.

“You rarely see it,” Boston manager John Farrell said of power surges like Betts’. “Sometimes you never see it in a career. We’re blessed to be able to watch Mookie every night from our dugout.”

PHOTO: BALTIMORE, MD – MAY 31: Mookie Betts #50 of the Boston Red Sox rounds the bases after hitting a solo home run in the first inning against the Baltimore Orioles at Oriole Park at Camden Yards on May 31, 2016 in Baltimore, Maryland. (Photo by Rob Carr/Getty Images)