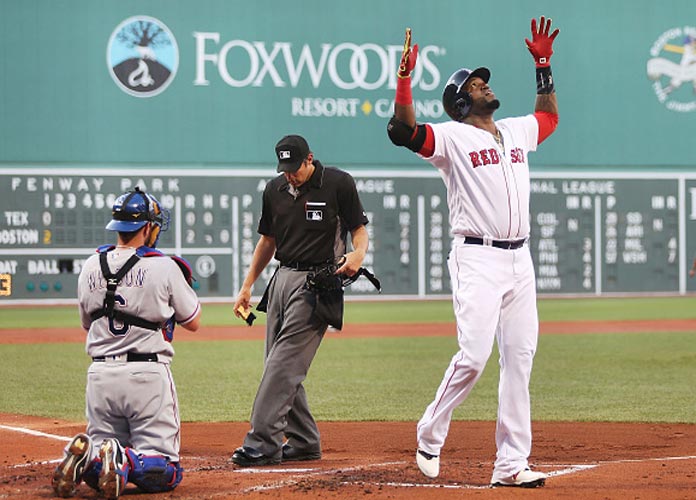 BOSTON, MA - JULY 06: David Ortiz #34 of the Boston Red Sox celebrates after hitting a two-run home run in the first inning during the game against the Texas Rangers at Fenway Park on July 6, 2016 in Boston, Massachusetts. (Photo by Adam Glanzman/Getty Images)

The Boston Red Sox may just be coming off a three-game road sweep by the New York Yankees, after losing 5-1 on Thursday, but they will still have something to celebrate this weekend — or someone, to be exact.

The Red Sox will pay tribute to retiring designated hitter David Ortiz this weekend, and though they have kept much of the festivities secret, one big aspect of them can be seen from above.

The portrait shows the 40-year-old Dominican pointing to the sky, his signature move that comes every time he hits a home run.

Boston clinched the American League East title on Wednesday despite losing that night to the Yankees, who have now been eliminated from the playoffs. On Thursday night, Red Sox manager John Farrell got very frustrated with a heckler at Yankee Stadium. The fan reportedly asked Farrell why Boston was trotting out its B-lineup with playoff seeding on the line.

“Why don’t you shut your ass up?” Farrell angrily retorted.

The Yankees also honored Ortiz in a very special way on Thursday. Before the game, Jacoby Ellsbury and David Cone presented Ortiz, nicknamed ‘Big Papi,’ with a leather-bound book of farewells, before Mariano Rivera made a surprise appearance with a painting as a second gift, before ‘Sweet Caroline’ was played over the PA.

You know you’re kind of a big deal when Mariano Rivera shows up your pregame ceremony! #ThanksPapi pic.twitter.com/7Ale4Lyh26

Team officials have stated they have pre-game celebrations planned for Ortiz before all three games, as he prepares for the final postseason of his career.

The specifics have not been announced, although fans have been asked to be in their seats approximately 30 minutes early prior to each game.

Boston (92-67) will open the American League Division Series on Thursday, though the time and opponent are yet to be determined.

BOSTON, MA – JULY 06: David Ortiz #34 of the Boston Red Sox celebrates after hitting a two-run home run in the first inning during the game against the Texas Rangers at Fenway Park on July 6, 2016 in Boston, Massachusetts. (Photo by Adam Glanzman/Getty Images)