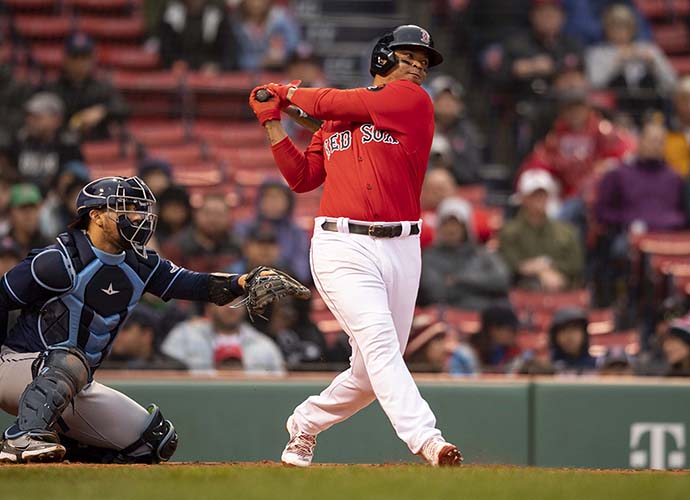 BOSTON, MA - OCTOBER 5: Rafael Devers #11 of the Boston Red Sox hits a single during the first inning of a game against the Tampa Bay Rays on October 5, 2022 at Fenway Park in Boston, Massachusetts. (Photo by Billie Weiss/Boston Red Sox/Getty Images)

They couldn’t hold on to Mookie Betts or J.D. Martinez or Xander Boegarts or Andrew Benintendi. But after signing second baseman Rafael Devers to an 11-year, $331 million extension, the Red Sox finally managed to regain some semblance of direction as they try to rebuild their fledgling franchise.

The deal is not done. The physical process hasn't started. But in the end, Devers is expected to remain in Boston.

For many, as the last key contributor from the 2018 Red Sox team that won the World Series, Devers was an artifact from an era when Boston was building something spectacular. With a stellar roster that was among the league’s leaders in offensive and defensive categories, the 2018 Red Sox were one of the best teams of the decade.

But instead of persisting as mainstay A.L. contenders, like the Astros and Yankees, the Red Sox have been inconsistent while slowly losing talented players to other franchises.

An improbable run to the ALCS in 2021 is the only time they’ve made the playoffs since 2018. After the 2019 season, Betts left for Los Angeles, a massive blow. Benintendi departed for Kansas City the following year. Both players have made significant contributions since leaving Boston’s organization.

This off-season was another extremely important one for the Red Sox with multiple key players entering free agency. But losing Boegarts and Martinez to other teams was merely a continuation of a trend — the pillars from 2018 kept falling. Devers was the last man standing and the team went to great lengths to secure him.

Signing the young second baseman with plenty of upside is an obvious sign that the Red Sox are still interested in fielding a successful team in the near future. But much of the volatile turnover in recent seasons remains unaccounted for, and there are still plenty of questions the team will have to answer after a 78-84 2022 season.

Now a bitter reminder of a potential dynasty’s glory days, Devers could lead the way to a fresh start in seasons to come. The organization is still a long way off from redefining Red Sox baseball, but signing Devers is a sensible step to that end.