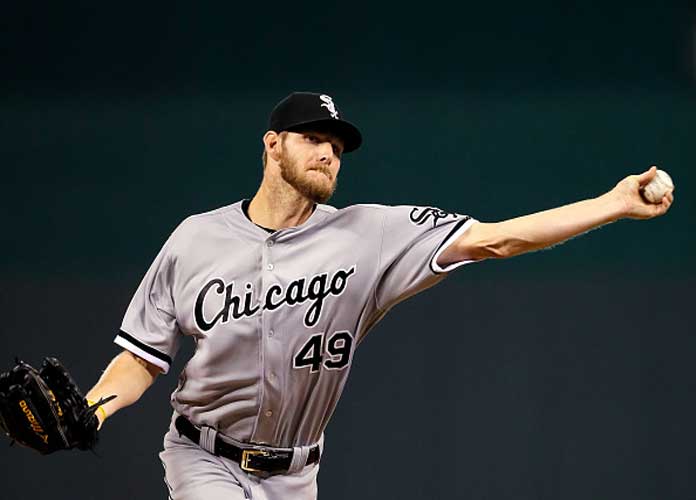 KANSAS CITY, MO - SEPTEMBER 16: Starting pitcher Chris Sale #49 of the Chicago White Sox warms up prior to the 3rd inning of the game against the Kansas City Royals at Kauffman Stadium on September 16, 2016 in Kansas City, Missouri. (Photo by Jamie Squire/Getty Images)

A baseball official briefed on the agreement confirmed the deal on the condition of anonymity, since the teams have not yet formally announced it.

The deal came at a large cost. Moncada and Kopech are two of the top prospects in the game. Per MLB sources, two well-regarded Single A players– outfielder Luis Alexander Basabe and righthander Victor Diaz– also went to Chicago.

The trade also, however, cements the Red Sox as a strong American League team who can do well in 2017, as the addition of Sale adds to a rotation that includes 2016 AL Cy Young Award winner Rick Porcello, and David Price, who won the same award for Tampa Bay in 2012.

Nevertheless, the Red Sox were able to keep their major league roster intact, something that did not seem possible given Chicago’s demands for Sale at the non-waiver trade deadline in July.

The Red Sox also boast Steven Wright and Drew Pomeranz, who were All-Stars last summer, as well as Eduardo Rodriguez and Clay Buchholz, among their starters.

Earlier in the day, Boston obtained right-handed reliever Tyler Thornburg from the Milwaukee Brewers for a package of players led by infielder Travis Shaw.

In the last five years, Sale is 70-47 with a 3.04 ERA and an average of 226.6 strikeouts. He made the All-Star team in each of those seasons and finished between third and sixth in the Cy Young voting.

During that span, only Clayton Kershaw of the Los Angeles Dodgers has a lower ERA and more strikeouts.

Kershaw has led the Dodgers to four straight division titles and has a $215 million contract. Sale has never pitched in the playoffs and is under club control for just $39.5 million for the next three years.

The White Sox are coming off their fourth straight losing season. Moncada, 21, signed for $31.5 million from Cuba in 2015. He hit .294, with 15 homers, 45 steals and a .918 on-base plus slugging percentage in the minors last season, earning a September promotion. Furthermore, Baseball America ranked him as the game’s No. 3 prospect before last season.

KANSAS CITY, MO – SEPTEMBER 16: Starting pitcher Chris Sale #49 of the Chicago White Sox warms up prior to the 3rd inning of the game against the Kansas City Royals at Kauffman Stadium on September 16, 2016 in Kansas City, Missouri. (Photo by Jamie Squire/Getty Images)