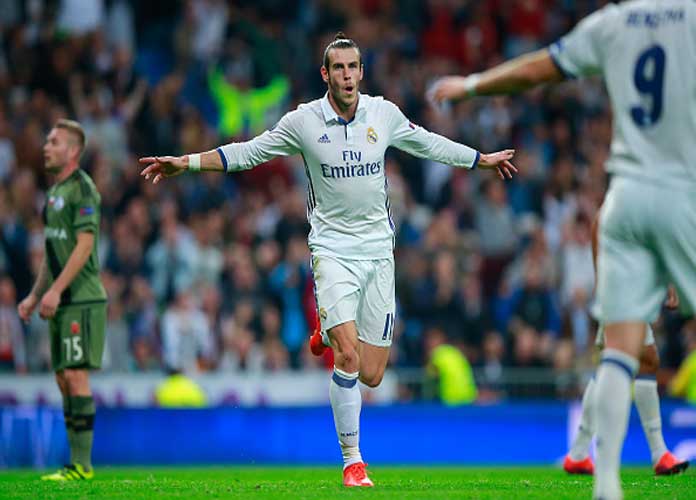 Gareth Bale out for Real Madrid vs Bayern Munich

The Welsh forward sustained the injury in Wednesday’s 2-1 first-leg victory in Munich, and as a result missed Saturday’s 3-2 La Liga win at Sporting Gijon.

“Gareth has worked very hard to get back with the team after being out three months injured,” Zidane said. “When he returned he was very excited and happy. He has some issues which stop him being able to play. We hope it is nothing serious, and he is back with us shortly.

“He deserves to be with us for this end to the season. Tomorrow he won’t be there, we don’t want to take any risks. I hope he can be with us [for the Clasico] but I cannot be sure. We go day by day.”

Madrid, which is seeking its first La Liga title since 2012, has a three-point lead in the Spanish league standings with one game remaining.

Bale was out for Los Blancos for nearly three months this season following a right ankle injury.

Zidane has not named a replacement for Bale, but among the potential players who could step in for the Welshman are Francisco “Isco” Alarcon — who scored twice agains Sporting on Saturday — Marco Asensio and Alvaro Morata.

Bayern coach Carlo Ancelotti has said Bale’s absence will not grant his team much of an advantage.

“They have plenty of good players to replace Bale,” Ancelotti said. “We are not going to worry about that.”

Cristiano Ronaldo, who scored both goals for Madrid in the first-leg game in Munich, will start in Tuesday’s quarterfinal.

Robert Lewandowski, who hasn’t played since injuring his right shoulder against Borussia Dortmund on April 8, is expected to start for Bayern.