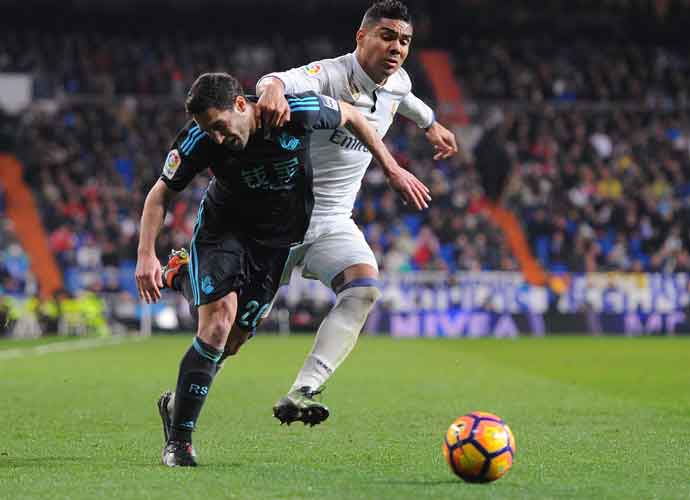 Real Madrid defeated Real Sociedad 3-0 at home on Sunday to maintain the number one spot in the La Liga standings.

After recording only one win in five games across all competitions, ending in Wednesday’s Copa del Rey loss to Celta Vigo, Madrid fans at Santiago Bernabeu seemed to lose faith in their team and thus behaved with hostility on Sunday.

Real Sociedad, on the other hand, boast eight victories in their last 11 league matches.

The first half was uneventful, as both sides struggled to find good scoring chances. But in the 38th minute, Cristiano Ronaldo played a pass to Mateo Kovacic, who found the back of the net to make it 1-0 for his first Liga goal of the season.

Then, barely five minutes after the break, Ronaldo doubled the hosts’ lead as he and Kovacic reversed roles and the 22-year-old Croatian midfielder set up Madrid’s star Portuguese striker.

Ronaldo, the reigning ballon D’Or winner, lobbed the ball over Sociedad’s 24-year-old Argentine goalkeeper Gerónimo Rulli in the one-on-one. The Portuguese now has scored 12 goals in six games Sociedad at the Bernabeu.

“Los Blancos” nearly scored their third goal in the 72nd minute. Ronaldo hit a free-kick and Alberto Morata headed the ball in, but his effort was ruled as offside. Lucas Vazquez had an opportunity one minute later following a mistake from Rulli when playing the ball out. However, the goalie compensated for his error with a fantastic save.

One minute after that, Real Sociedad were left with ten players after Íñigo Martínez was sent off with a second yellow.

Madrid capitalized on their man-advantage to net their third goal. Vazquez picked out Morata in the 82nd minute and he headed home to seal the win.