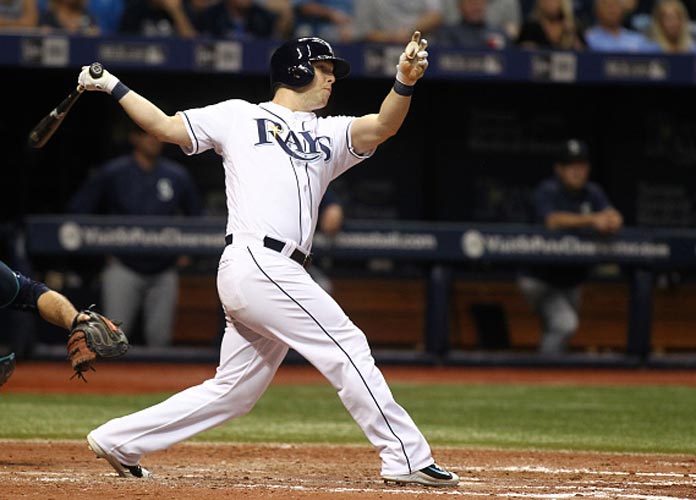 ST. PETERSBURG, FL - JUNE 15: Corey Dickerson #10 of the Tampa Bay Rays hits an RBI single to score Evan Longoria during the sixth inning of a game against the Seattle Mariners on June 15, 2016 at Tropicana Field in St. Petersburg, Florida. (Photo by Brian Blanco/Getty Images)

Matt Andriese pitched 2 2/3 hitless innings and Logan Forsythe tripled with one out and scored the winning run in the 13th to lead the Tampa Bay Rays to a 3-2 home victory over the Seattle Mariners on Wednesday night.

It had been five days since Andriese’s last start, and on Wednesday, the Rays right-hander delivered for his team after being sent to the bullpen with a 5-0 record.

“Fortunately for us, him being down there won us a ballgame,” said Rays manager Kevin Cash.

“I was very comfortable actually. I just went about it the same way I always do,” said Andriese (6-0). “I think they were just going to ride me out because I was pretty fresh. I haven’t started in four or five days so I wanted to just ride it out and see how many pitches I could throw.”

Forsythe’s run in the 13th came after Mariners left-hander Mike Montgomery walked Logan Morrison with the bases loaded and after he hit pinch-hitter Tim Beckham with a pitch and walked pinch-hitter Taylor Motter.

The Mariners gained a 2-0 lead in the fourth inning after a leadoff single by Robinson Cano and a homer from outfielder Nelson Cruz, his 16th of the season. Both hits came off Rays starting left-hander Drew Smyly.

“Nobody said it was going to be easy,” said Cruz. “I think we have enough talent to put a good stretch. We just have to put it together.”

Smyly struck out a career-high 12 in 6 2/3 innings while giving up two runs on four hits. After allowing the home run to Cruz, the left-hander did not give up another hit and struck out six of the 11 batters he faced.

“I was happy to keep our team in it, but the story’s the bullpen,” Smyly said. “They held them scoreless for eight innings.”

Corey Dickerson drove in Tampa Bay’s first two runs with a sacrifice fly in the fourth and a game-tying two-out single in the sixth. Dickerson has 10 of his 31 RBIs in five games against the Mariners.

Steve Pearce tripled, doubled and reached base four times for the Rays, who have now won nine of their last eleven games. The Rays (31-32, 4th in AL East) also beat Seattle 8-7 on Tuesday.

Mariners starter Nathan Karns, who was acquired in a winter trade from the Rays, struck out eight in five innings, giving up two runs on four hits. It was Karns’ third straight start in which he failed to pitch six innings, and eighth of the season.

Seattle has now lost four straight, and will face the Rays again for the three-game series finale on Thursday afternoon at Tropicana Field. The Mariners will next head to Boston for a three-game series against the Red Sox after leaving their bullpen exhausted.

“We used pretty much everybody,” manager Scott Servais said. “We will be pretty thin tomorrow, but we will figure it out.”

Mariners (34-31, 2nd in AL West) left-hander James Paxton (0-2) will make his fourth start of the season in Thursday’s series finale, while left-hander Blake Snell will make his first start for the Rays at Tropicana Field. Snell made his major league debut in New York on April 23.

PHOTO: ST. PETERSBURG, FL – JUNE 15: Corey Dickerson #10 of the Tampa Bay Rays hits an RBI single to score Evan Longoria during the sixth inning of a game against the Seattle Mariners on June 15, 2016 at Tropicana Field in St. Petersburg, Florida. (Photo by Brian Blanco/Getty Images)