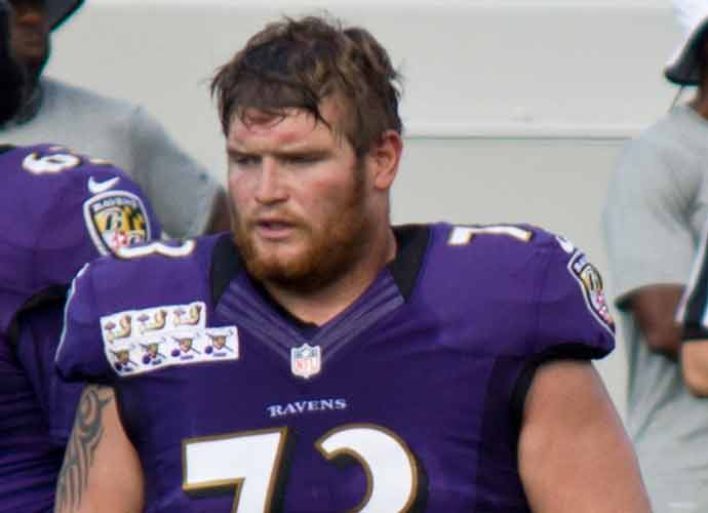 Baltimore Raven’s Pro Bowl offensive lineman Marshal Yanda is set to retire from the NFL at the age of 35.

Yanda, one of the most accomplished offensive linemen of the last two decades is calling it a career.  The former Raven offensive guard played 13 seasons with Baltimore, including eight Pro Bowls. Yanda announced the move in a video posted by the team on Tuesday.

After 13 incredible seasons, Marshal Yanda is calling it a career. pic.twitter.com/rMCIfJZoFm

Kyle P. Barber stated in a Roundtable reaction, a few words about the Pro Bowler and his favorite memory.

“His work ethic, determination, and level of commitment supersede anybody on that practice field. He is a legend in his own right and I wish him and his family nothing but the best post-football.” Barber said.  “My favorite memory of Yanda was during a particularly warm practice a few years ago, Yanda didn’t go for the water or Gatorade’s in the ice bucket being wheeled around for the players. Rather, Yanda submerged his head inside the cooler for multiple seconds to combat the heat. After he was done, he strapped his helmet back on and went to work. No comment, no smirk, no attitude. He was hot, cooled off, and now there is more work to be done. ”

Yanda, a third-round pick in 2007, has been a model of consistency for the Ravens. He came out as a big asset for the Ravens in his rookie season and became a starter. Yanda had a total of 116 starts in his long career. Yanda was the No. 4 ranked guard in Pro Football Focus’ grades last season and has been a PFF darling for seasons. He was a key reason the Ravens set an NFL record for rushing yards by a team in a season in 2019 (3,296).

With the franchise record-breaking season in 2019, losing the veteran guard is really going to hurt the Ravens for the 2020-2021 season. The Ravens went 14-2 and quarterback Lamar Jackson won an MVP award. They were a balanced team that had a really bad playoff opener against the Tennessee Titans. But all signs were that the Ravens could pick up right where they left off.