Rams Reportedly Made Deal With NFL To Draft Michael Sam To Not Film 'Hard Knocks' - uSports.org 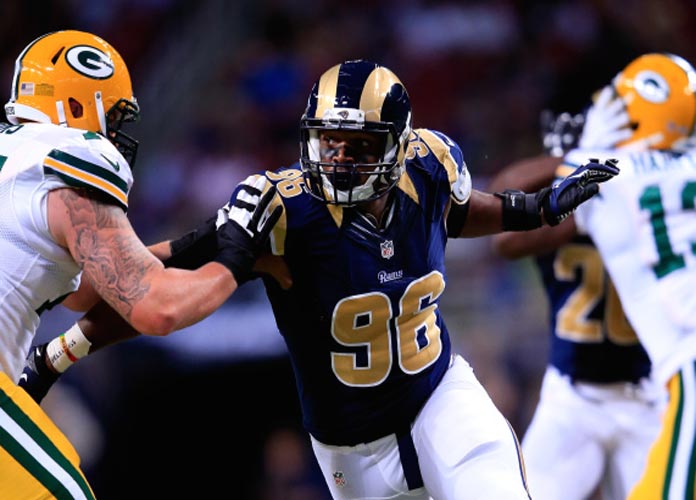 Longtime NFL reporter Howard Balzer revealed on Wednesday that the NFL agreed to a deal with the Los Angeles Rams — then from St. Louis — in which the two agreed the Rams would not have to participate in HBO’s Hard Knocks series in 2014 if they drafted former Missouri defensive end Michael Sam.

Rams Reportedly Made Deal With NFL To Draft Michael Sam

Sam, 26, became the first openly gay player to be drafted by an NFL team when the Rams selected him in the seventh round of the 2014 Draft.

Sam stated that he was not remotely shocked by the report.

“I’m not surprised at all,” Sam tweeted.

Sources say NFL agreed not to have Rams on Hard Knocks in 2014 if they drafted Michael Sam.

According to Blazer, the NFL made the deal with the Rams after they became concerned that Sam wouldn’t be drafted.

“That in itself is absolutely absurd, it’s 100 percent incorrect,” Fisher told ESPN’s Mike and Mike on Thursday. “I was really taken aback by those comments. It’s insulting, from my standpoint, as it relates to Michael. We had three seventh-round picks. When we drafted Michael he was the best player on the board. Who in their right mind would think that you give up a draft choice to avoid doing something like that?”

The Rams, who just moved back to Los Angeles from St. Louis this year, will be the new featured team on Hard Knocks this year.

Sam was released by the Rams before the star of the 2014 regular season. He then signed with the Dallas Cowboys as a practice squad member, and only stayed with them for seven weeks.

Sam then signed a deal with the Montreal Alouettes of the Canadian Football Leauge (CFL) in 2015 but only played one game after leaving the team due to mental health reasons.

“The last 12 months have been very difficult for me, to the point where I became concerned with my mental health. Because of this I am going to step away from the game at this time,” Sam tweeted out last August. “I thank the Alouettes for this opportunity and hope to be back on the field soon. Thank you all for your understanding and support.”

The last 12 months have been very difficult for me, to the point where I became concerned with my mental health. Because of this I am 1/3

going to step away from the game at this time. I thank the Alouettes for this opportunity and hope to be back on the field soon. Thank 2/3

you all for your understanding and support. 3/3

“If I had my way, I really do wish I went undrafted,” Sam said at the time. “I could have actually went to a team who really needed pass rush, and needed a defensive end who could pass rush the quarterback. But the Rams, even though I learned a log from Chris Long and [Robert] Quinn, I think that I could have done better being on an active roster right now if I went to a different team.”

The former Missouri defensive end also stated in January via Twitter that he’s going to give the NFL “one more shot.”

I’m going to give it one more shot https://t.co/mxYcdgS5eB

Sam was named SEC defensive player of the year in 2013, the same year he graduated from college.