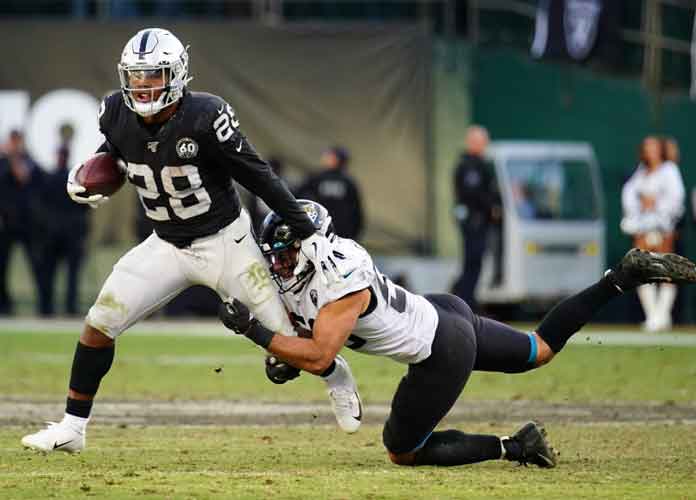 OAKLAND, CALIFORNIA - DECEMBER 15: Josh Jacobs #28 of the Oakland Raiders is tackled on a run by Austin Calitro #58 of the Jacksonville Jaguars during the second half at RingCentral Coliseum on December 15, 2019 in Oakland, California. (Photo: Getty Images)

On early Monday morning, less than 12 hours after the Raiders returned from their season-ending victory in Denver against the Broncos, Pro Bowl running back Josh Jacobs was arrested for driving under the influence.

According to multiple reports, Jacobs, 22, was arrested after local Las Vegas Metropolitan Police responded to a single-car crash near the McCarran Airport Connector and East Sunset Road at approximately 4:42 a.m. Police suspected that Jacobs was under the influence, and Jacobs was taken to the hospital to treat minor injuries from the crash.

Once he received treatment, Jacobs was brought to the Clark County Detention Center, where he was sentenced with a DUI, according to the Las Vegas Metropolitan Police public information officer. Jacobs’ attorney said that they would not plead guilty if the case even made it to that point.

“No complaint has been filed against our client and there are no blood test results to support a suggestion of impairment. We intend to enter a not guilty plea on behalf of Mr. Jacobs if he is ever charged,” said Jacobs’ attorneys David Z. Chesnoff and Richard A. Schonfeld in a statement.

The Las Vegas Raiders have also acknowledged the incident in a statement. “The Raiders are aware of the situation involving Josh Jacobs,” the team said. “The organization takes these matters seriously and we have no further comment at this time.”

Jacobs was released from custody and has a court appearnce set for March 8.