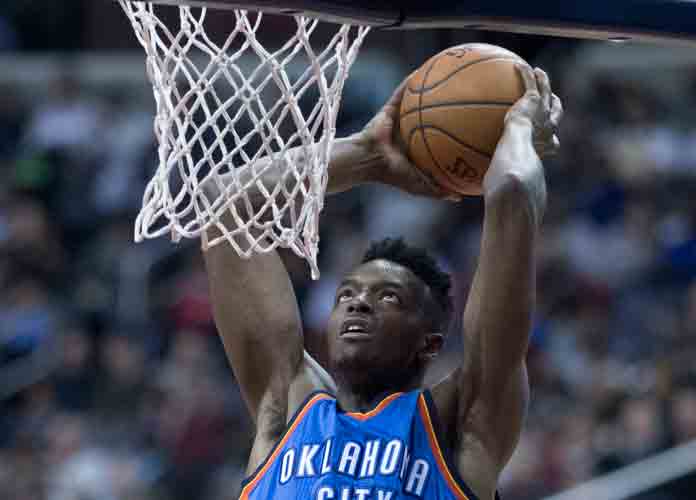 Jerami Grant dunking with the Thunder in 2017 (Image: Wikipedia)

The NBA offseason is in full swing, and with the NBA Draft on the horizon, plus free agency starting on June 30, many teams are starting to make moves to put them in a position to contend. The Blazers are doing just that, as they sent the number 36 pick in this year’s draft and a 2025 first-rounder (via Milwaukee) to the Detroit Pistons in exchange for forward Jerami Grant.

Grant has been one of the more productive players in the NBA in the last few seasons, spending time with the Pistons, Nuggets and Thunder since 2019. The Syracuse product was drafted with the 36th pick in the 3014 NBA Draft by the Philadelphia 76ers. He was then traded to the Oklahoma City Thunder in 2016 for Ersan Illiuasova and draft picks. Grant only started five games in his first two seasons with the Thunder but blossomed in 2019 averaging 13.6 points and 5.2 rebounds while starting 77 games for the Thunder.

Grant was traded to the Denver Nuggets for a first-round pick during the 2019 offseason, but left the team a year later, signing a three-year, $60 million contract with the Detroit Pistons in a sign-and-trade. He was extremely productive in Detroit, averaging 20.9 points in his two seasons with the Pistons and finishing as the runner-up for the Most Improved Player award in 2021.

The trade happens as Portland is desperately trying to strengthen the core around Damian Lillard in hopes of a run at a title. The Blazers also hold the number seven pick in this year’s draft but there are talks of them trading it for more assets or to acquire another premium role player. They have also been linked with the Toronto Raptors forward OG Anonouby.

Portland Trail Blazers are in pursuit of Toronto Raptors forward OG Anunoby with the No. 7 pick in Thursday’s draft in play, league sources tell @YahooSports.

The Pistons are continuing their rebuild. After selecting Oklahoma State product Cade Cunningham with the first pick in the 2021 NBA Draft, they also have the 5th pick in this year’s draft and hope to add a complimentary young star to pair alongside Cunningham.

Read more about:
Blazers NBA NBA Draft Pistons
Listen to the uInterview Podcast!
Get the most-revealing celebrity conversations with the uInterview podcast!