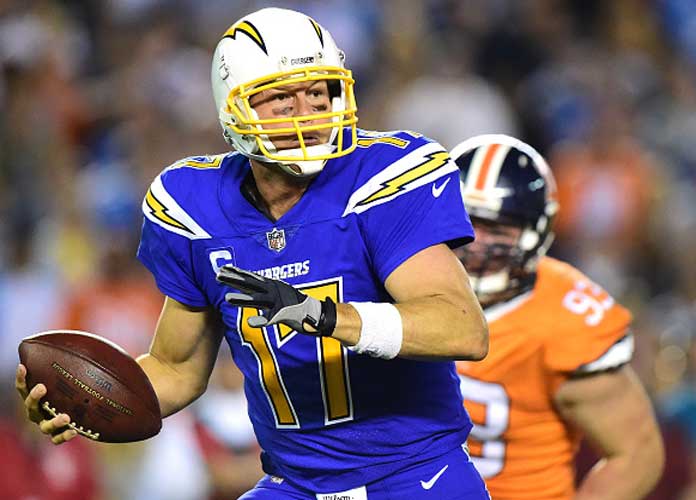 Philip Rivers threw for 178 yards and a touchdown, passing Hall of Famer Dan Fouts to become San Diego’s career passing leader, to carry the Chargers to a 21-13 home victory over the Denver Broncos on Thursday night.

The win may have saved coach Mike McCoy’s job. The Chargers (2-4) were coming off an error-filled loss at Oakland, and earlier this season dropped three games in which they led at the two-minute warning. Chargers fans have become increasingly upset with the conservative McCoy.

Meanwhile, the team is attempting to convince voters to approve a $1.1 billion public handout for a new downtown stadium by means of a boost in the hotel occupancy tax.

The Broncos– the reigning Super Bowl champions– were coached by special teams coordinator Joe DeCamillis after head coach Gary Kubiak was instructed by doctors to sit this one out due to a migraine condition similar to strokes.

Denver (4-2) looked very sluggish behind Trevor Siemian, who was back at quarterback after rookie Paxton Lynch struggled in last week’s home loss to Atlanta. The Broncos, who have now lost two straight–saw their NFL-record 15 straight divisional road victories snapped. Siemian finished 30-of-50 for 230 yards.

The Chargers ended their streak of 10 consecutive divisional losses dating to 2014.

Rivers, in his 13th season with San Diego and 11th as starter, has accumulated a total of 43,094 yards passing in his career. Fouts threw for 43,040 yards in 15 seasons with the Bolts.

The Chargers committed two turnovers that led to the Broncos’ first two scores. San Diego was up 10-3 at halftime and it could have been more as they had 11 first downs to the Broncos’ 2 and 173 yards in offense to just 60 for Denver.

Denver was also called for 12 penalties during the game for a total 102 yards.

The Chargers will next visit the Atlanta Falcons on Sunday, Oct. 23, while the Broncos will host the Houston Texans on Oct. 24.

SAN DIEGO, CA – OCTOBER 13: Philip Rivers #17 of the San Diego Chargers scrambles as he is chased by Jared Crick #93 of the Denver Broncos during the fourth quarter of a 21-13 Charger win at Qualcomm Stadium on October 13, 2016 in San Diego, California. (Photo by Harry How/Getty Images)