Philadelphia Phillies Star Bryce Harper Returns To The Lineup With A Bang - uSports.org 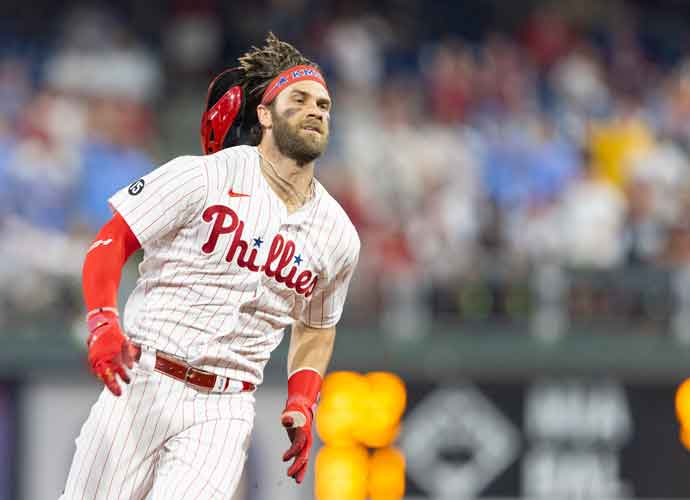 PHILADELPHIA, PA - JULY 27: Bryce Harper #3 of the Philadelphia Phillies runs to third base on his way to an inside the park home run in the bottom of the fifth inning against the Washington Nationals at Citizens Bank Park on July 27, 2021 in Philadelphia, Pennsylvania. (Photo by Mitchell Leff/Getty Images)

The Philadelphia Phillies have been waiting a while for Bryce Harper to return to the lineup – and the big money man delivered quickly.

During the first inning against the Pittsburgh Pirates, the Phillies wasted no time making noise offensively.

The team immediately had the bases loaded with no one out – all set for Harper, who was batting cleanup in the first game back since June.

The 29-year-old star outfielder took the count to two balls and two strikes.

He then drove a pitch through the shifted right infield that got too much of the plate.

That drove in two runs to give the Phillies runners on first and third.

That was Harper’s first at-bat since June 25 when San Diego Padres pitcher Blake Snell let a 97-mile per hour (mph) fastball get away from him that unfortunately drilled the star outfielder on the left thumb.

X-rays revealed that it was a fracture.

The good news is the Phillies were able to manage without Harper.

The team held a 32-20 record without him and sit second in the wild card race in the National League.

This year, the Phillies rank ninth in the majors in batting average and eight in on-base plus slugging (OPS).

Ahead of the trade deadline, the Phillies acquired pitchers Noah Syndergaard and David Robertson.

If the injury hadn’t happened, Harper would have had a decent shot of winning the NL’s most valuable player award again.

Before the injury, Harper was slashing .318/.385/.985 (batting average, on-base percentage and slugging percentage.)

But likewise, this year’s race will come down between two St. Louis Cardinals: Paul Goldschmidt and Nolan Arenado.

But most importantly, the Phillies will hope Harper will stay healthy and that he will help the team make noise in the playoffs.