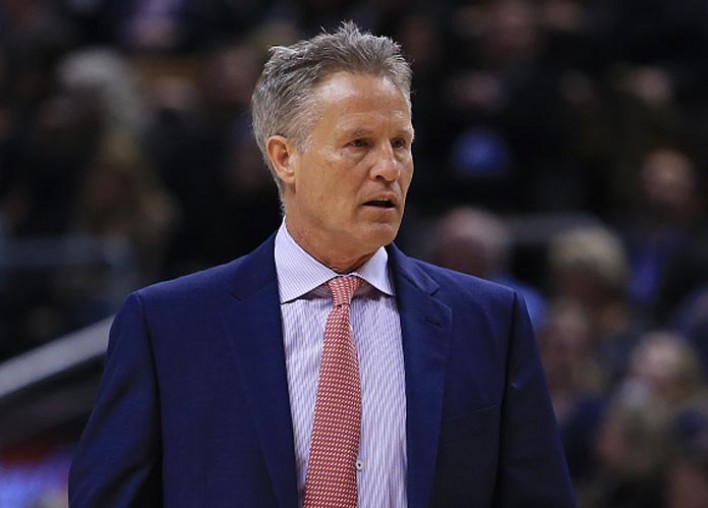 TORONTO, ON - APRIL 12: Head Coach Brett Brown of the Philadelphia 76ers looks on during the first half of an NBA game against the Toronto Raptors at the Air Canada Centre on April 12, 2016 in Toronto, Ontario, Canada. NOTE TO USER: User expressly acknowledges and agrees that, by downloading and or using this photograph, User is consenting to the terms and conditions of the Getty Images License Agreement. (Photo by Vaughn Ridley/Getty Images)

After losing big in the last three years, the Philadelphia 76ers received great news on Tuesday night: they won the NBA draft lottery, thus earning the No. 1 selection in June.

“The pain that we’ve all gone through, the pain of losing is real. You can’t camouflage it,” said coach Brett Brown, who represented the 76ers on stage. “The city has been incredibly patient, tolerant, choose any word you want. I think this validates some of the pain we went through.”

The Los Angeles Lakers finished second. The Boston Celtics, with a pick dealt to them by the Brooklyn Nets, remained in the No. 3 slot.

The rest of the 14 NBA teams are slotted in the inverse order of their win-loss record.

The 76ers started 0-18 this past season and finished 10-72, just off the worst record in the history of the 82-game schedule, and had a 26.9 percent chance of landing the No. 1 pick (their own 25 percent chance, and Sacramento’s 1.9 percent chance, since the 76ers had the right to swap picks with the Kings from a previous trade).

The Sixers finished at No. 3 or lower in the previous two drafts. In his three seasons with Philadelphia, Brown has compiled an overall record of 47-199.

“We can now make the decision all by ourselves,” said Brown. “We don’t have to wait and see what someone else does. It gives us the injection we need.”

The 76ers never tried to put a competitive team on the court under general manager Sam Hinkie, who resigned in April after overseeing a plan to accumulate draft picks but not wins. They also have the 24th and 26th picks in the first round. Jahlil Okafor and Joel Embiid were selected third overall by Philadelphia in each of the past two seasons.

Former 76ers center Dikembe Mutombo, who works for the NBA as a global ambassador, accidentally tweeted out congratulations to the team on their draft victory about four hours earlier.

“I want to let people know there was no conspiracy,” Mutombo told The Associated Press in a phone interview, saying it was a mistake and that he thought “a lot of people understood the error that was made.”

The Lakers will have the No. 2 pick for the second consecutive year after drafting D’Angelo Russell last year. They went 17-65 in Kobe Bryant’s final season.

The Phoenix Suns will pick fourth, followed by the Minnesota Timberwolves, New Orleans Pelicans and Denver Nuggets. The Suns picked up another lottery pick when the Washington Wizards fell out of the top 10 to No. 13.

TORONTO, ON – APRIL 12: Head Coach Brett Brown of the Philadelphia 76ers looks on during the first half of an NBA game against the Toronto Raptors at the Air Canada Centre on April 12, 2016 in Toronto, Ontario, Canada. NOTE TO USER: User expressly acknowledges and agrees that, by downloading and or using this photograph, User is consenting to the terms and conditions of the Getty Images License Agreement. (Photo by Vaughn Ridley/Getty Images)