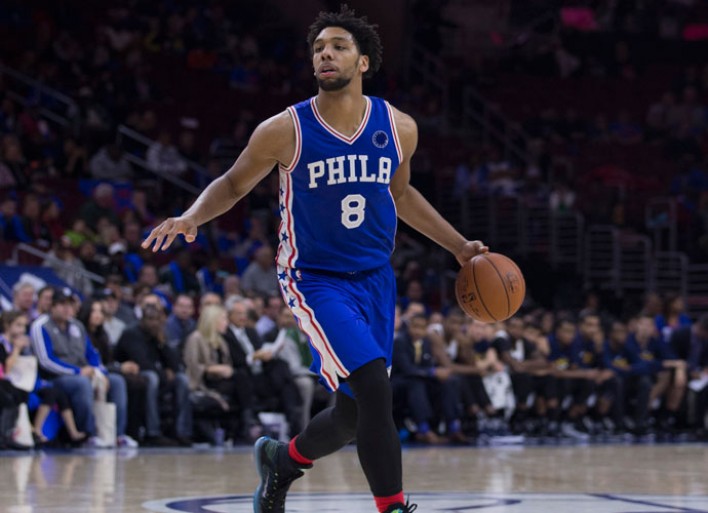 PHILADELPHIA, PA - OCTOBER 30: Jahlil Okafor #8 of the Philadelphia 76ers plays in the game against the Utah Jazz on October 30, 2015 at the Wells Fargo Center in Philadelphia, Pennsylvania. (Photo by Mitchell Leff/Getty Images)

While most teams wouldn’t celebrate reaching four wins in a season, that’s major progress for the Philadelphia 76ers. After an abysmal start to the season, the Sixers won for the third time in their past six games by beating the Minnesota Timberwolves 109-99 on Monday night.

The first factor in the Sixers change in fortunes was the hiring of Jerry Colangelo as as chairman of basketball operations last month. His first move was to trade for Ish Smith and the club has been rewarded with three wins; they only had one before Colangelo took charge.

On Monday, Smith was the key figure again as he scored 21 points; eight of those came down the stretch in the fourth quarter.

“We’re young, we play fast,” Smith said. “We’re constantly trying to get better. Good win, let’s celebrate the night, let’s move on to the next game.”

The trade has revived the Sixers and, perhaps more importantly, brought some excitement and energy to the team. “I think we have such a young team that his personality pairs up with their youthful spirit a lot,” head coach Brett Brown said.

The 76ers are also bringing veteran big man Elton Brand back to Philadelphia. While he is no where near the player he once was, the veteran will attempt to provide leadership for the young squad. “I know I can affect change and be a part of something,” he said.

Photo: Jahlil Okafor #8 of the Philadelphia 76ers plays in the game against the Utah Jazz on October 30, 2015 at the Wells Fargo Center in Philadelphia, Pennsylvania. (Photo by Mitchell Leff/Getty Images)