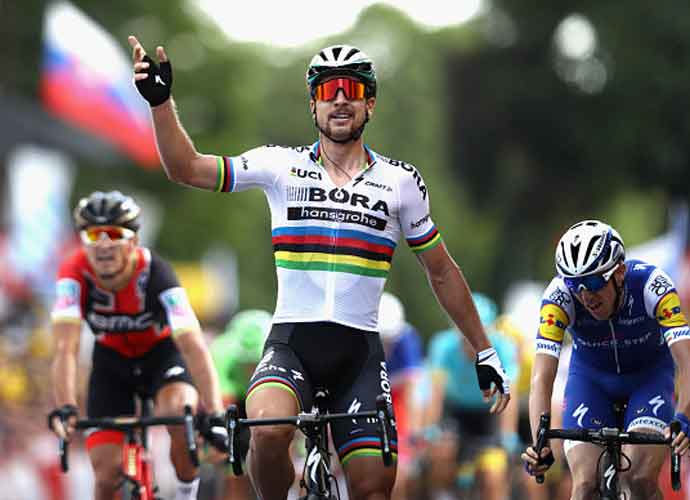 LONGWY, FRANCE - JULY 03: Peter Sagan of Slovakia and team Bora-Hansgrohe celebrates as he crosses the line to win stage 3 of the 2017 Tour de France, a 212.5km road stage from Verviers to Longwy on July 3, 2017 in Longwy, France. (Photo by Bryn Lennon/Getty Images)

Sagan won the 212.5 km stage, held between Verviers in Belgium to Longwy, France, although Geraint Thomas retained the yellow jersey and remains in the lead. Ireland’s Dan Martin took third place. With the win, Sagan has a total of eight career stage wins and is in line to win the points leaders’ green jersey for the sixth time in a row, tying the all-time record.

Sagan, the favorite heading into the day, was challenged briefly at the end of the race when Richie Porte attempted an attack with only 800 meters left in the race. WIth Porte out in front Matthews, Martin, and Sagan joined in on the attack and took the top three spots as Porte fell behind. During the attack Sagan, in the final uphill sprint, appeared to drop a gear. Although risky, the move payed off.

“It was not easy, it was a lot of stress in the peloton,” Sagan said, according to The Guardian. “In the end, a pretty hard climb, BMC did a ver good job for Richie [Porter]. After I decided ‘OK, I go,’ it was 400m to go, I start my sprint and I put my foot out of my clip. I thought, ‘Another mistake,’ but I restarted and I won.”

Stage Four begins tomorrow, July 4. Professional riders from around the world will travel from Mondoft-les-Bains in Luxemburg to Vittel, in north-eastern France. The stage is 207.5 kilometers in total.

The 2017 Tour de France consists of 21 total stages, the final being held on July 23, ending in Paris. The longest stage, stage 19, runs 222.5 kilometers from Emburn to Salon de Province. It takes place on July 21.