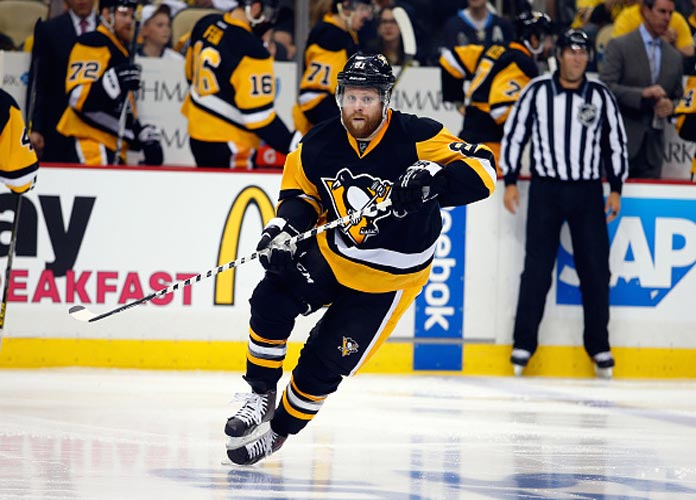 PITTSBURGH, PA - MAY 26: Phil Kessel #81 of the Pittsburgh Penguins in action against the Tampa Bay Lightning in Game Seven of the Eastern Conference Final during the 2016 NHL Stanley Cup Playoffs at Consol Energy Center on May 26, 2016 in Pittsburgh, Pennsylvania. (Photo by Justin K. Aller/Getty Images)

Pittsburgh Penguins right winger Phil Kessel appears to have simply shrugged off his omission from Team USA’s roster for the World Cup of Hockey this coming fall.

“Obviously you’re a little disappointed, but is what it is,” said Kessel, who was among the players who drew a crowd at an NHL-run media gathering Sunday on the eve of the Stanley Cup final. “I’ve had a pretty good playoffs and I’ve always done pretty well for them in all the tournaments I’ve played for them. But we’re in the Stanley Cup final, so I can’t be too disappointed.”

Penguins General Manager seemed to bit his tongue when asked about his thoughts on the omission. Kessel, a two-time Olympian, was not among the final seven additions announced Friday despite leading Pittsburgh in playoff goals (9, with 9 assists).

“I’m trying to decide whether I’m going to give you a long answer or a short one,” said Rutherford, who ended up giving a short one. “So I’m surprised he’s left off Team USA.”

Coach Mike Sullivan stated Kessel, 28, has come a long way this season by improving his play away from the puck, scoring clutch goals and finding a fit in the locker room.

“I think Phil deserves all the credit for how his game has evolved over the course of this season,” Sullivan said. “I know that we would not be playing in the Stanley Cup final without his contribution.”

The Penguins defeated the San Jose Sharks 3-2 in Game 1 of the Stanley Cup Finals at their own Consol Energy Center on Monday night.

Pittsburgh recovered after blowing an early two-goal lead. Rookie Bryan Rust opened scoring at 12:46 of the first period by firing home a rebound off a Justin Schultz shot to earn his sixth goal of the playoffs, a franchise record for postseason goals by a rookie.

Just one minute later, Conor Sheary, who didn’t become a regular until mid-January, pushed the lead to 2-0 when Sidney Crosby flicked a blind backhand cross-ice pass to him. Sheary then fired a wrist shot from the right circle that flew by Sharks goaltender Martin Jones.

San Jose answered with a strong second period. Czech centre Tomas Hertl, 22, scored a power-play goal by firing a shot from just outside the crease between Penguins goalie Matt Murray’s legs 3:02 into the second to make it 2-1. Then with 1:48 remaining in the period, Patrick Marleau collected a rebound off a one-timer from defenseman Brent Burns behind the Pittsburgh net and then beat Murray on a wraparound that bounced off the young goalie’s extended right leg and into the net to tie the game.

Penguins center Nick Bonino ultimately sealed the victory for Pittsburgh, however, by darting to the net and knocking in Kris Letang’s centering pass with 2:33 remaining.

“Tanger put it right on my stick,” Bonino said of Letang’s pass that led to his fourth goal of the playoffs. “It was a shot that wasn’t my hardest shot by any means but I kind of found a way to flip it over him.”

Game 2 is set for Wednesday night in Pittsburgh.

PITTSBURGH, PA – MAY 26: Phil Kessel #81 of the Pittsburgh Penguins in action against the Tampa Bay Lightning in Game Seven of the Eastern Conference Final during the 2016 NHL Stanley Cup Playoffs at Consol Energy Center on May 26, 2016 in Pittsburgh, Pennsylvania. (Photo by Justin K. Aller/Getty Images)