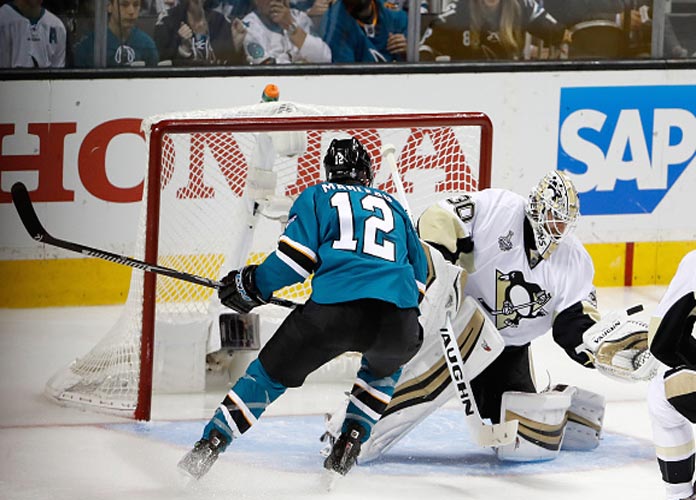 SAN JOSE, CA - JUNE 06: Matt Murray #30 of the Pittsburgh Penguins makes the save as Patrick Marleau #12 of the San Jose Sharks looks for a rebound in Game Four of the 2016 NHL Stanley Cup Final at SAP Center on June 6, 2016 in San Jose, California. The Penguins defeated the Sharks 3-1. (Photo by Christian Petersen/Getty Images)

Penguins Beat Sharks 3-1 In Game 4, One Win From Stanley Cup

Following a crushing 3-2 overtime road loss to the San Jose Sharks on Saturday, the Pittsburgh Penguins regained hope after defeating the Sharks 3-1 in Game 4 at SAP Center in San Jose on Monday night.

Penguins Beat Sharks 3-1 In Game 4, One Win From Stanley Cup

The Penguins now lead the Stanley Cup Final series 3-1 and are just one victory away from winning a national championship, which they will seek to earn when they return home to Consol Energy Center for Game 5 Thursday night.

“You’ve just got to understand that it’s going to take our best and we’re going to see their absolute best,” Pittsburgh captain Sidney Crosby said. “In saying that, you can’t get caught looking ahead of things. We’ve had a great approach all playoff long — all season long — in making sure we’re staying in the moment here. That will be important here, now more than ever.”

The Penguins have come a long way from a rough start to the season that began with three straight losses. After struggling through much of November, general manager Tim Rutherford fired second-year head coach Mike Johnston and replaced him with Mike Sullivan.

“No one was happy with the way [the season] started,” said defenseman Ian Cole, who opened scoring on Monday with his first-ever playoff goal. “We learned hard lessons. We grew as a team. We had some fantastic additions to our team. We just kind of grew together and knew we had to kind of come together as a team to be this successful, to get to where we wanted to get to, and we did that.”

The Penguins will try to win the Stanley Cup for the fourth time; each of their previous wins (1991, Minnesota North Stars; 1992, Chicago Blackhawks; 2009, Detroit Red Wings), were on the road. If they win on Thursday, it would be the first major sports championship won at home by a Pittsburgh-based team since the Pirates defeated the New York Yankees in Game 7 of the 1960 World Series.

Cole scored 7:36 into Game 4, slamming home the rebound of a shot from Phil Kessel that Sharks goalkeeper Martin Jones kicked into the right face-off circle.

It was Cole’s first goal in 105 games, regular season and playoffs, dating to March 26, 2015 against the Carolina Hurricanes.

“I hit a lot of posts, a lot of sticks; pucks were going to the open net and they’d get tipped wide,” Cole said. “It was a weird year in that sense. It’s nice to finally get that one. I was saving a special one for a special game.”

The only time San Jose has led in this Final series was when forward Joonas Donskoi scored in overtime of Game 3. The Penguins, meanwhile, have been ahead in 435:46 of playing time, dating to Game 5 of the Eastern Conference Final against the Tampa Bay Lightning.

Center Evgeni Malkin, who assisted on Cole’s goal, scored at 2:37 of the second period to make it 2-0. He got his stick on a power-play shot by Kessel for his first goal in six games. It was Pittsburgh’s first power-play goal in eight attempts in the Finals, and Malkin’s 10th career game-winning goal in the postseason.

Sharks forward Melker Karlsson scored at 8:07 of the third period to make it 2-1, but the Sharks were unable to capitalize, despite outshooting Pittsburgh 12-7 in the period.

Penguins goalie Matt Murray finished with 23 saves, and is now 5-0 with a 1.76 goals-against average and .935 save percentage this postseason.

Eric Fehr gave the Penguins a 3-1 lead with 2:02 remaining, thus leaving the Sharks one loss from the end of their first Cup Final in their 25-year history.

“We’re confident that we can go to Pittsburgh and win a hockey game,” Sharks forward Logan Couture said. “We’ve been good on the road all year. We’re going to go there and start by having a good first period, into the second [period] and then the third and see what happens.”

PHOTO: SAN JOSE, CA – JUNE 06: Matt Murray #30 of the Pittsburgh Penguins makes the save as Patrick Marleau #12 of the San Jose Sharks looks for a rebound in Game Four of the 2016 NHL Stanley Cup Final at SAP Center on June 6, 2016 in San Jose, California. The Penguins defeated the Sharks 3-1. (Photo by Christian Petersen/Getty Images)