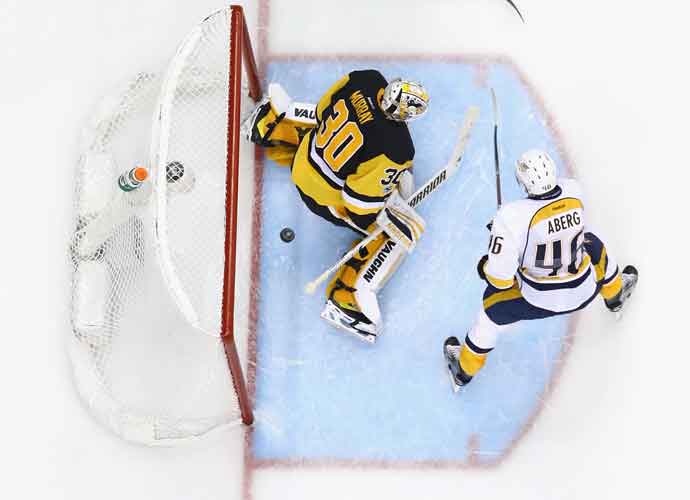 The Pittsburgh Penguins beat the Nashville Predators 5-3 in game one of the Stanley Cup Finals on Monday night despite only having 12 shots on goal. On a night otherwise controlled by the Predators, the Penguins were able to capitalize on several opportunities and take advantage of the Predators’ equally sluggish offense.

Pittsburgh scored their first three goals in the first twenty minutes, ending the first period with a commanding lead. The Predators, in order to claw their way back into the game, would have to step up defensively. And they did so, plus some. The Penguins were unable to take a single shot on goal through out the entirety of the second period. It was the first time the Penguins went shot-less in an entire period in team history.

With a goal from Ryan Ellis in the second, and one from Colton Sissons and another from Frederick Gaudreau to start the third period, the Predators tied the game at 3-3.

37 minutes after taking their last shot, the Penguins’ Jake Guentzel took a shot and scored what would turn out to be the game winning goal, with a little over three minutes left in the match. It was the fourth game winning goal Guentzel has scored during the playoffs this year. With that goal, Guentzel tied the NHL record for game winning goals scored by a rookie.

Nick Bonino scored the Penguins’ fifth and final goal with a little over a minute of play left to cap the victory.

To add to the wackiness of the game, a Nashville Predators fan was ejected from the PPG Paints Arena in Pittsburgh after tossing a dead catfish onto the ice early in the second period. The mess required the game to stop for several minutes so stadium crew could clean up.

The fan, Jacob Waddell, brought the fish from Tennessee to Pittsburgh, vacuum sealed, inside his compression shorts. After sneaking it into the stadium, Waddell removed it in the men’s restroom, according to police.

Waddell is now being charged with disorderly conduct, disrupting a meeting, and possessing instruments of a crime.

Game two of the Stanley Cup Finals is on Wednesday, May 31 at 8 p.m. EST in Pittsburgh. It will be broadcast on NBC Sports Network.