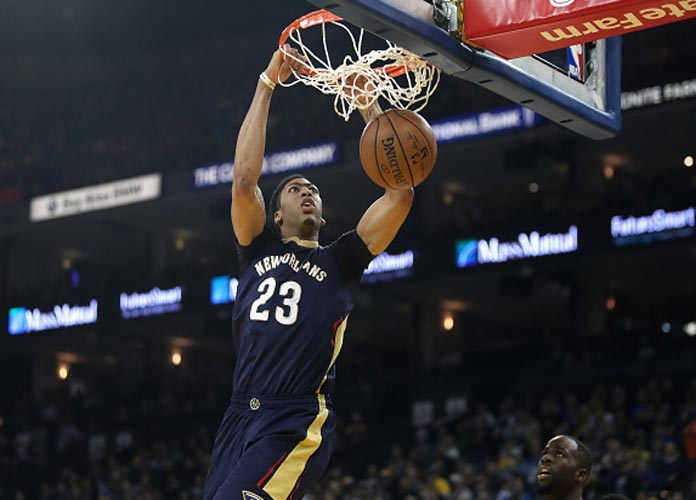 OAKLAND, CA - MARCH 14: Anthony Davis #23 of the New Orleans Pelicans dunks the ball over Draymond Green #23 of the Golden State Warriors at ORACLE Arena on March 14, 2016 in Oakland, California.

Pelicans’ Anthony Davis Sprains Ankle, 116-104 Preseason Loss To Rockets, Could Be Out 10-15 Days

New Orleans Pelicans star Anthony Davis played only six minutes in Wednesday’s 116-104 preseason loss to the Houston Rockets in Beijing, China, before he was forced out with a sprained right ankle.

The 23-year-old power forward is expected to be out 10-15 days, which means he could miss the Pelicans’ Oct. 26 season opener against the Denver Nuggets, according to ESPN and The Undefeated’s Marc Spears.

The Pelicans did not release an official update on Davis’ injury immediately after the game except to say he suffered a right ankle sprain.

Gentry has been dealing with a shorthanded team since he took over the squad last year, and the Pelicans’ injury troubles precede his arrival.

Davis’ injury occurred after he seemed to step on the foot of the Rockets’ Brazilian center Nenê on a post move, thus twisting his ankle. Davis previously underwent season-ending surgery in March to repair a stress reaction problem in his left knee cap that forced him to miss the last 21 games of the regular season. He also suffered a torn labrum last season, although he did not require surgery on his left shoulder.

New Orleans shooting guard E’Twaun Moore was also forced to leave Wednesday’s game in the second quarter after suffering a right heel contusion injury. Moore, who was signed this summer as a free agent, did not return after scoring two points in just over 10 minutes against Houston.

In addition, backup power forward Terrence Jones missed his second straight preseason game due to a right knee contusion. Jones has not played since last Tuesday’s 113-96 loss to the Indiana Pacers at the Smoothie King Center, when he scored 10 points in 24 minutes.

Swingman Tyreke Evans and small forward Quincy Pondexter did not make the trip to China because both are still going through rehab work to recover from knee surgeries earlier this year.

Before their season opener, the Pelicans have two more preseason contests: one against the Atlanta Hawks on Tuesday (Oct. 18), and another against the Orlando Magic on Oct. 20. Both games are on the road.

OAKLAND, CA – MARCH 14: Anthony Davis #23 of the New Orleans Pelicans dunks the ball over Draymond Green #23 of the Golden State Warriors at ORACLE Arena on March 14, 2016 in Oakland, California.