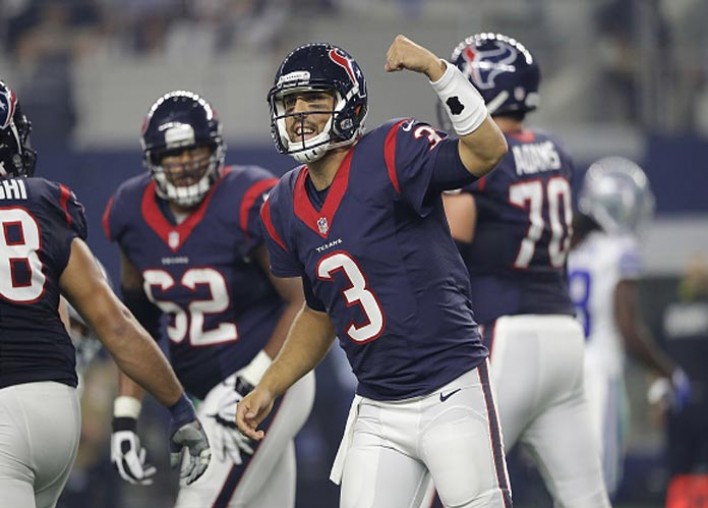 ARLINGTON, TX - SEPTEMBER 01: Tom Savage #3 of the Houston Texans reacts during a preseason game against the Dallas Cowboys at AT&T Stadium on September 1, 2016 in Arlington, Texas. (Photo by Ronald Martinez/Getty Images)

Robert Kraft and the New England Patriots have pledged to donate up to $1 million to the American Red Cross in support of the Hurricane Harvey Disaster Relief Fund.

Hurricane Harvey began over the weekend in the Houston, Texas area, and has left around 30,000 people seeking emergency shelter. The unprecedented flooding of two or more feet of water has already claimed up to ten lives and injured dozens more while leaving thousands homeless in the country’s fourth largest city.

“Houston is a special city to our family and our organization,” said Kraft. “The New England Patriots and our fans have celebrated two of our franchise’s greatest and most memorable moments in Houston. The city was a tremendous host for Super Bowl XXXVIII in 2004 and once again this past February for Super Bowl LI. Houston could not have provided more support to us during those visits, and we welcome the opportunity to provide this support when Houston needs it most. When natural disasters have impacted our country, they have always unified communities and rallied support throughout the nation. We have already heard stories of heroic rescues and strangers helping strangers in this time of need. These stories have inspired us, as we always encourage bringing communities together, building bridges and helping others. We are eager to join in these efforts and provide our support.”

According to a Patriots press release from Tuesday, donations will be accepted by the American Red Cross at www.redcross.org/thekraftgroup.

Robert Kraft & #Patriots will match up to $1M in donations to Hurricane Harvey @RedCross Relief Fund.

Besides Kraft, another NFL team owner has promised to donate to the relief fund for the natural disaster: Houston Texans Chairman and CEO Bob McNair, who said he would donate to the United Way of Greater Houston’s flood relief fund.

“These dollars will be put to go use in the relief and recovery efforts,” Texans coach Bill O’Brien said Monday, according to NFL.com. “We also hope our actions will encourage others to do whatever they can to help their neighbors in need right now.”

O’Brien then dedicated the season to the city and people of Houston.

“You know football, obviously, is important, but I think the most important thing right now is doing everything we can for our city. I can tell you right now, we’re going to dedicate this season to the city of Houston, to the people of Houston,” he said. “There are no guarantees in football — that’s not what I’m here to say. But I will guarantee this team will go out every Sunday, Monday, Thursday — whenever they ask us to play — and we’ll play our asses off for the city of Houston, I promise you that.”

We talked to @NFL star @JJWatt of the @HoustonTexans who has raised $1 MILLION (and counting!) for Hurricane #Harvey relief. pic.twitter.com/ltQ9ZqQR3Z

The Cowboys and Texans were scheduled to play at Houston’s NRG Stadium for a preseason game on Thursday, although that matchup has now been moved to Arlington due to public safety concerns. The BYU vs. LSU football game that was set to be held at NRG Stadium on Sept. 2 has also been moved to New Orleans’ Superdome for similar reasons.

According to CBS News, the National Weather Service does not expect flooding to peak until Wednesday or Thursday.

“We are not out of the woods yet,” Acting Secretary of the Department of Homeland Security Elaine Duke said Monday morning. “Harvey is still a dangerous and historic storm.”

ARLINGTON, TX – SEPTEMBER 01: Tom Savage #3 of the Houston Texans reacts during a preseason game against the Dallas Cowboys at AT&T Stadium on September 1, 2016 in Arlington, Texas. (Photo by Ronald Martinez/Getty Images)