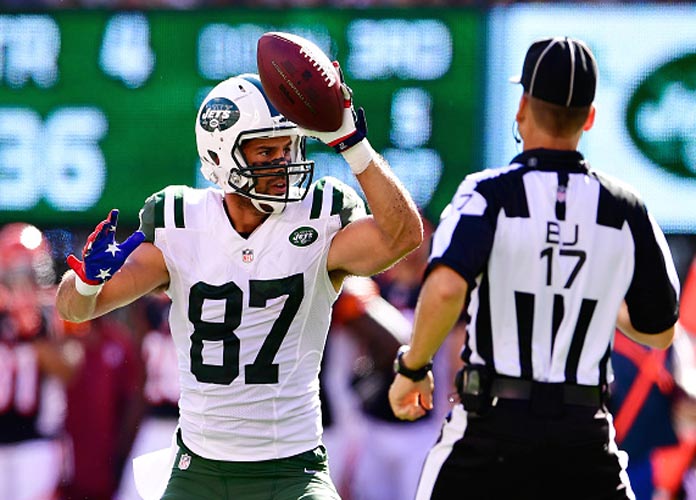 New England Patriots wide receiver Eric Decker announced his retirement from the NFL after eight seasons on Sunday afternoon, less than one month after signing with the team.

Decker, 31, agreed to a one-year deal with the Patriots on Aug. 3. He shared the following message on his Instagram account:

“It has been my childhood dream and my passion to play the game of football,” the veteran wideout wrote. “I was very fortunate and blessed to have had the opportunity to have those dreams fulfilled and to have played with such extremely talented and hard-working teammates, coaches and staff.”

Decker sat out the first half of New England’s preseason loss to the Carolina Panthers on Friday.

Now that he is leaving, the Patriots are in desperate need of more receivers. Julian Edelman is suspended for the first four weeks of this season due to performance-enhancing drug use, which means Phillip Dorsett, Chris Hogan and Cordarrelle Patterson will likely be used in the team’s regular season opener. Riley McCarron, Devin Lucien, Braxton Berrios, Matthew Slater and Paul Turner are the other wideouts New England could give playing time to this year.

Patriots coach Bill Belichick said over the weekend he believes Decker has learned everything he needs to know thanks to his previous experience working with offensive coordinator Josh McDaniels back when the wideout played with the Denver Broncos. Belichick added that Decker had practiced playing several different offensive positions during his brief time with New England.

Decker’s retirement during the preseason follows that of another veteran receiver, former New York Giants star Victor Cruz, who has since joined ESPN as an analyst.

Decker also previously played with the Tennessee Titans and New York Jets, and caught 439 passes for 5,816 yards and 53 touchdowns.