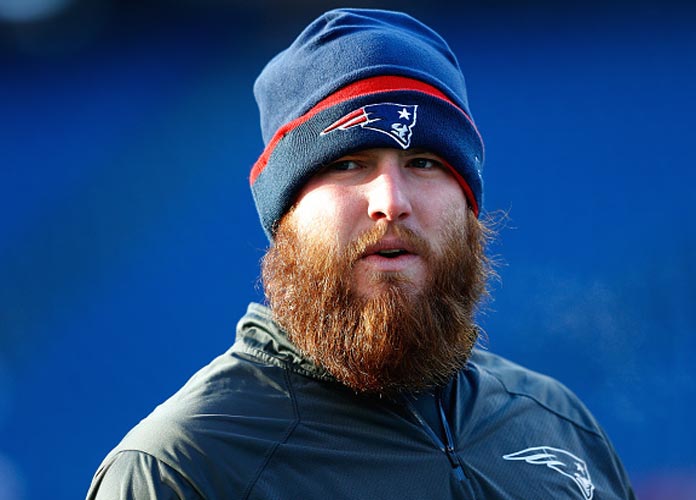 FOXBORO, MA - JANUARY 10: Bryan Stork #66 of the New England Patriots warms up before the 2014 AFC Divisional Playoffs game against the Baltimore Ravens at Gillette Stadium on January 10, 2015 in Foxboro, Massachusetts. (Photo by Jim Rogash/Getty Images)

Stork, who was selected by the Patriots as a fourth-round draft pick out of Florida State in 2014, started 17 games for New England.

The 25-year-old, who was in the process of losing the starting job to 2015 undrafted free agent David Andrews, also got himself thrown out of a joint practice with the Chicago Bears last week for fighting with Bears linebacker Sam Acho.

Andrews was the Patriots’ staring center last season for the first nine weeks while Stork was out with injury, and the team went undefeated in that span. Stork started for New England in Super Bowl XLIX, which they won in 2015. Stork also suffered a concussion during training camp, and has a history of them dating back to his college days.

As the Boston Herald recently reported, Stork has struggled to maintain his temper, often getting himself into situations of fighting. He was penalized for head-butting a Denver Broncos player in the AFC title game last season, and was also tossed from a minicamp practice in June for fighting.

The headbutt at the end is what gets Stork the flag pic.twitter.com/RYyNauCYTW

Stork’s name was thrown around in low-level trade rumors throughout the offseason, although it appears that Patriots coach Bill Belichick couldn’t find anything worth his time. There seems to remain no doubt, however, that the center will get some tryouts around the league over the next few weeks if he clears waivers given the string of injuries at the position.

As NFL Media’s Mike Garafolo recently stated, the Bears are currently exploring potential trades for a center. After Hroniss Grasu injured his ACL, the team installed Ted Larsen in his place but have kept an eye out for a potential challenger.

FOXBORO, MA – JANUARY 10: Bryan Stork #66 of the New England Patriots warms up before the 2014 AFC Divisional Playoffs game against the Baltimore Ravens at Gillette Stadium on January 10, 2015 in Foxboro, Massachusetts. (Photo by Jim Rogash/Getty Images)