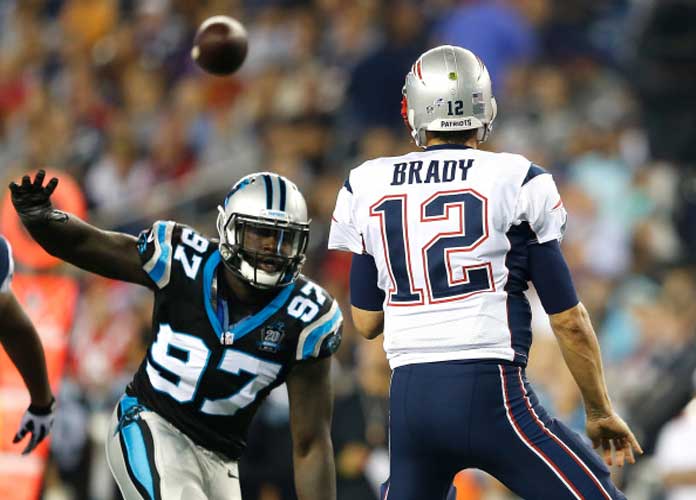 FOXBORO, MA - AUGUST 22: Tom Brady #12 of the New England Patriots throws over the head of Mario Addison #97 of the Carolina Panthers in the second quarter in a preseason game at Gillette Stadium on August 22, 2014 in Foxboro, Massachusetts. (Photo by Jim Rogash/Getty Images)

Less than two weeks before the start of the signing period, the Carolina Panthers re-signed defensive end Mario Addison to a three-year deal on Sunday.

According to NFL Network Insider Ian Rapoport, the deal is worth $22.5 million.

The 29-year-old, who is coming off his best season in the NFL, was praised by general manager Dave Gettleman.

“Mario has shown he is one of the best emerging pass-rushers in the league and he deserves this contract,” Gettleman said in a statement, per Bryan Strickland of the team’s official website. “He consistently affects the quarterback, and we envision an increased role for him in our defense. He’s a pro in the way he approaches the game and brings an upbeat attitude to our locker room. We’re thrilled he will continue his career with the Panthers.”

Addison’s career-high 9.5 sacks in 2016 led the Panthers and his 22 QB takedowns since 2014 are also a franchise-best in that time span.

“It’s very important. … I want to get a real good contract. I want a contract where I can take care of my family and can say that I put in the work and it really paid off,” Addison reportedly told Scott Fowler of the Charlotte Observer.

Addison is the first of Carolina’s five unrestricted free agent defensive lineman to re-sign with the team. The Panthers will likely spend big money on defensive tackle Kawann Short, who is a top-10 free agent this offseason, through either a new contract, as the team did with Addison, or a franchise tag, which would be valued at $13.615 million.

Panthers receiver Charles Johnson, 30, will also be on the market.

FOXBORO, MA – AUGUST 22: Tom Brady #12 of the New England Patriots throws over the head of Mario Addison #97 of the Carolina Panthers in the second quarter in a preseason game at Gillette Stadium on August 22, 2014 in Foxboro, Massachusetts. (Photo by Jim Rogash/Getty Images)