Panthers Advance To Super Bowl After Beating Down Cardinals 49-15 - uSports.org 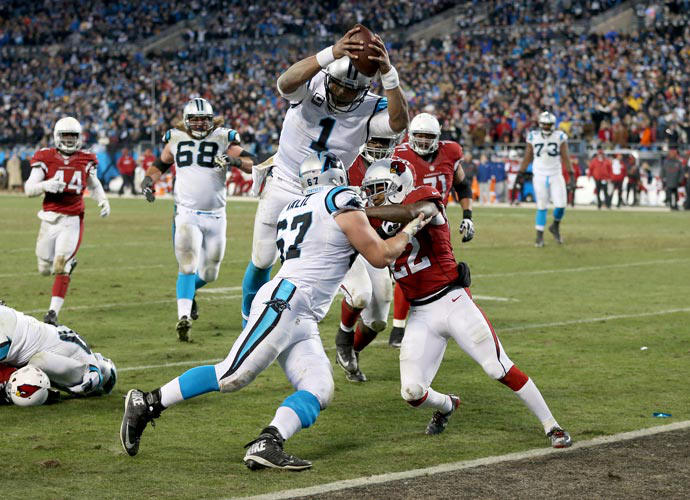 CHARLOTTE, NC - JANUARY 24: Cam Newton #1 of the Carolina Panthers scores a touchdown in the third quarter against the Arizona Cardinals during the NFC Championship Game at Bank of America Stadium on January 24, 2016 in Charlotte, North Carolina. (Photo by Streeter Lecka/Getty Images)

Panthers Advance To Super Bowl After Beating Down Cardinals 49-15

There is nothing that has stood in the Carolina Panthers’ way since the 2015-16 season began. The team led the entire league with a 15-1 record for the season, the number one overall playoff seed, and home field advantage throughout the playoffs. With a presumed MVP quarterback in Cam Newton and a league-high 10 players going to the Pro Bowl, the doubters of the team may be officially silenced. The continuing demolition by the Panthers happened yesterday against the Arizona Cardinals in the NFC Championship game, culminating in a 49-15 defeat on the Cardinals.

At the end of the first quarter, the Panthers were already shutting out the Cardinals by 17 and eventually up 24-7 without any breather being taken by the defense. The Panther defense pressured Cardinals quarterback Carson Palmer throughout the game, causing four interceptions and two fumbles. With this in mind, Newton would take advantage of great field position and throw 19 of 28 for 335 yards with two touchdowns to make it 24-7, including a one-yard touchdown run to add to his impressive play throughout the year. The score would be run up through the second half, with another rushing touchdown by Newton, a Devon Funchess touchdown catch, and a pick-six by Pro Bowl linebacker Luke Kuechly late in the fourth quarter.

With the win, the Panthers are officially in Super Bowl 50, their second Super Bowl appearance in franchise history, which will take place in Levi’s Stadium in Santa Clara, Calif. on Feb. 7. They will face the Denver Broncos, with quarterback Peyton Manning playing in what could be his final game as an NFL quarterback.

Photo: CHARLOTTE, NC – JANUARY 24: Cam Newton #1 of the Carolina Panthers scores a touchdown in the third quarter against the Arizona Cardinals during the NFC Championship Game at Bank of America Stadium on January 24, 2016 in Charlotte, North Carolina. (Photo by Streeter Lecka/Getty Images)

Read more about:
Cardinals NFL Panthers
Listen to the uInterview Podcast!
Get the most-revealing celebrity conversations with the uInterview podcast!