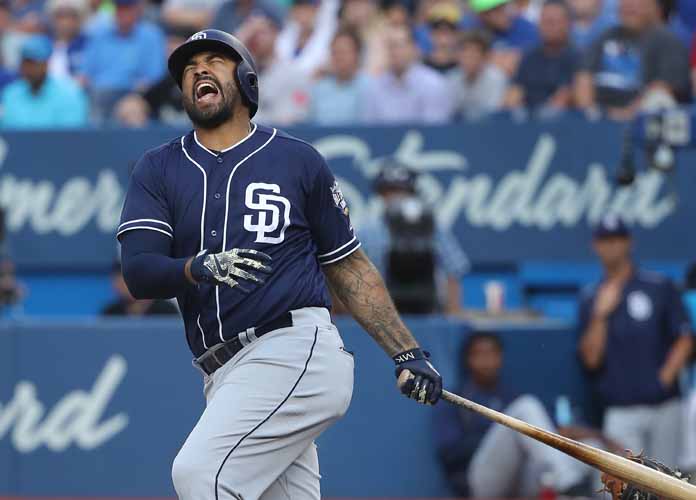 Padres and Braves Make A Deal, Kemp Heads To Atlanta

San Diego Padres sent right fielder Matt Kemp to Atlanta plus $10.5 million in exchange for outfielder Hector Olivera and agreeing to cover $30 million left on Olivera’s contract. Injuries in the 2012 – 2013 seasons have decreased Kemp’s stock, but he’s been back up the last two seasons and has already tied his 23 home runs he scored last season.

Olivera will be returning to league play August 2, after he served an 82-game suspension for domestic violence. At that point he will reportedly be designated for assignment by the Padres. Olivera got into trouble on the first road game of the season after he was arrested for allegedly assaulting a woman at a hotel in Arlington, Virginia. He was charged with misdemeanor assault and battery and suspended, upon which the Braves reportedly began looking to replace him.

According to ESPN Braves GM John Coppolella is relieved to not have to worry about Olivera any more. He said it was a good trade in that Atlanta doesn’t lose any draft picks or minor league prospects. “So we were able to stick with the plan we had while still filling a major need for right handed power,” Coppolella said.

Kemp signed a $160 million contract before the 2012 season and he has $21.5 million left on his contract this year and the next three seasons. Olivera signed a $62.5 million six-year contract with the Dodgers before being traded to the Braves last July.

The Padres have taken advantage of mid-season trades and traded four starting pitchers, Drew Pomeranz to the Red Sox, James Shields to the White Sox, Andrew Cashner and Colin Rea to the Marlins. San Diego also traded closer Fernando Rodney to the Marlins and outfielder Melvin Upton Jr. to the Jays.

The Padres have outfielders Hunter Renfroe and Manuel Margot who both currently play for the Padres minor league association Class AAA El Paso Chihuahuas. Both ball players are likely to be called up in September. Margot had achilles surgery not too long ago, but is said to be in the clear as he was back in action last week. Renfroe is walking 3.9 percent and striking out less than 20 percent this season.