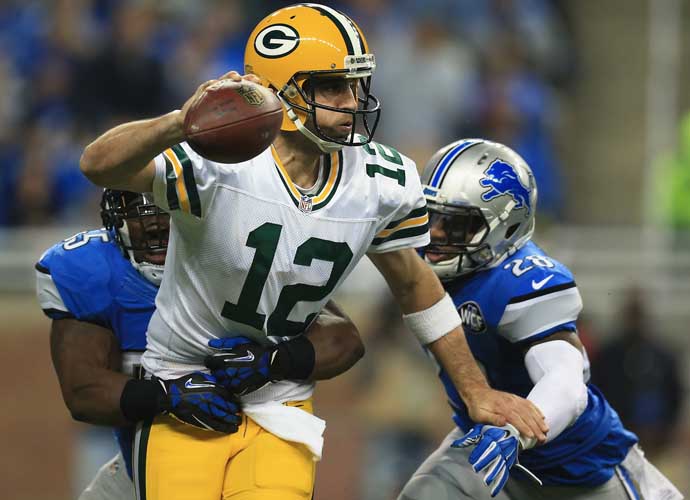 DETROIT, MI - DECEMBER 3: Aaron Rodgers #12 of the Green Bay Packers is tackled by Quandre Diggs #28 and Stephen Tulloch #55 of the Detroit Lions in the first quarter at Ford Field on December 3, 2015 in Detroit, Michigan. (Photo by Andrew Weber/Getty Images)

Aaron Rodgers is dedicated to do whatever it takes to appropriately prepare for the upcoming NFL season.

Packers QB Aaron Rodgers Taking Care Of His Body Ahead

Whether it’s teaching his new teammates the way or working on his own fitness and nutrition, the veteran Green Bay Packers quarterback is focusing all of his efforts on making sure his team stays on top.

“Every year is not guaranteed in this league,” said Rodgers, 32, on Monday. “You have to approach every season as you’re going to go all-in, and hope you can stay healthy and keep going after that.

Rodgers recently cut dairy out of his diet–ironically enough for playing on a team known as “cheeseheads”— and is transitioning to more of a vegan diet, with the occasional meat exception. He has tried to stick more to fruits and vegetables, mostly the latter. The QB has also said he’s lighter now–weighing around 218 pounds–than he’s ever been since 2007, before he was a starter. He said he was around 230 pounds at his heaviest weight.

Weight loss has been a major conversation topic around the Packers this offseason, led by running back Eddie Lacy’s workouts under the guidance of P90X founder Tony Horton. All-Pro guard Josh Sitton also said he dropped 20 pounds since the end of the season.

New England Patriots quarterback Tom Brady has been an influence on Rodgers, who said last week that he used to follow an 80/20 eating rule: Make sure 80 percent of what you eat is healthy, and enjoy the other 20 percent.

The drive behind the nutrition change was two-fold. Following knee surgery right after the 2015 season, he wanted to be more careful of eating foods that could cause inflammation. Rodgers performed his own research and even spoke with team nutritionist Adam Korzun and friends around the league about how he could maintain his game at a top level for as long as possible.

“I think I can extend my career if I continue to eat a little bit better,” he said. “Because it carries over not just to the offseason, but what you’re eating the night before the game and what you’re eating in the morning and the afternoon – if it’s a night game – how that affects your performance.”

Rodgers sounded confident about the Packers’ offense for the 2016 season. Receiver Jordy Nelson is set to return, and the team also boasts the addition of tight end Jared Cook.

PHOTO: DETROIT, MI – DECEMBER 3:  Aaron Rodgers #12 of the Green Bay Packers is tackled by Quandre Diggs #28 and Stephen Tulloch #55 of the Detroit Lions in the first quarter at Ford Field on December 3, 2015 in Detroit, Michigan. (Photo by Andrew Weber/Getty Images)