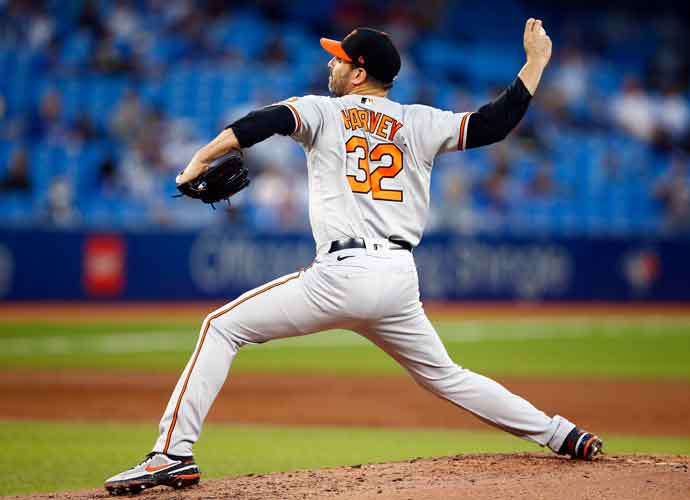 ORONTO, ON - SEPTEMBER 01: Matt Harvey #32 of the Baltimore Orioles delivers a pitch during a MLB game against the Toronto Blue Jays at Rogers Centre on September 1, 2021 in Toronto, Ontario, Canada. (Photo by Vaughn Ridley/Getty Images)

Indeed he did, and now the Dark Knight is in for some dark nights.

MLB has doled out its discipline—a 60-game suspension sans pay, retroactive to April 29—against Baltimore Orioles pitcher Matt Harvey after he was implicated in drug use and distribution in the Eric Kay trial following the death of Tyler Skaggs.

“The Office of the Commissioner of Baseball announced today that Baltimore Orioles pitcher Matt Harvey has received a 60-game suspension without pay for participating in the distribution of a prohibited Drug of Abuse in violation of Major League Baseball’s Joint Drug Prevention and Treatment Program. The start date of Harvey’s 60-game suspension is retroactive to April 29, 2022.”

MLB announced today that Orioles pitcher Matt Harvey has received a 60-game suspension without pay for participating in the distribution of a prohibited Drug of Abuse. The start date of Harvey’s 60-game suspension is retroactive to April 29.

It stems from Harvey’s testimony at the former Los Angeles Angels employee Kay’s trial for his role in the death of Angels pitcher Skaggs. A federal jury found Kay guilty on two felony counts after it was determined that he distributed the fentanyl that caused the death of Skaggs. Kay won’t be sentenced until June 28, though he faces a minimum of 20 years in prison.

During his testimony, Harvey, 33, admitted that he would provide Skaggs with Percocet pills, and that painkiller usage was common among MLB players at the time (2019). Harvey also copped to using cocaine and that he gave oxycodone to Skaggs in addition to receiving it from him.

On July 1, 2019, Skaggs was found unresponsive in his hotel room on a road trip and pronounced dead. His death was deemed to be the result of choking on his own vomit due to an accidental overdose—exacerbated by alcohol consumption—of oxycodone and fentanyl.

Once a star player for the New York Mets, Harvey has bounced around from the Reds, Angels, Royals, and, of course, Orioles.