Oregon Upsets Iowa To Advance To The Sweet 16 - uSports.org 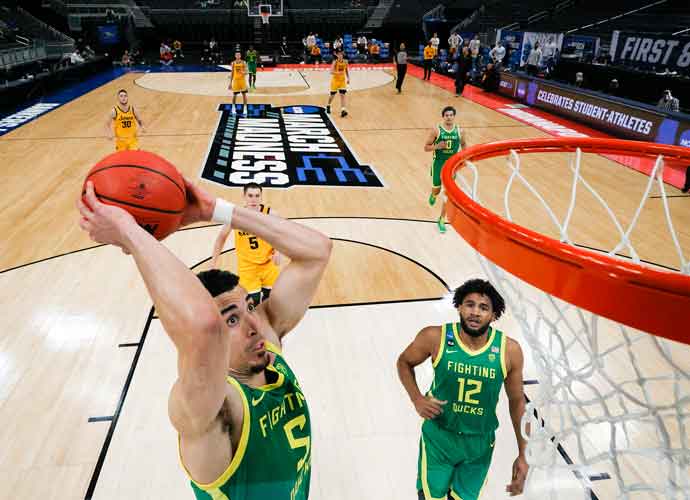 INDIANAPOLIS, INDIANA - MARCH 22: Chris Duarte #5 of the Oregon Ducks drives to the basket against the Iowa Hawkeyes in the second round game of the 2021 NCAA Men's Basketball Tournament at Bankers Life Fieldhouse on March 22, 2021 in Indianapolis, Indiana. (Photo by Sarah Stier/Getty Images)

The Oregon Ducks will be dancing for at least another week.

The Ducks, who are the No. 7 seed in the West region of March Madness, upset the No. 2 seed Iowa Hawkeyes on Monday, 95-80. Oregon advanced to the Sweet 16 for the fourth time in the past five tournaments, along with three other teams from the Pac-12.

Despite being in the round of 32, the Ducks had not yet played a game in the NCAA Tournament. Their first round game against No. 10 seed VCU resulted in a forfeit due to a COVID-19 outbreak on Virginia Commonwealth’s team. This led to a matchup against the favored Hawkeyes, who many believed were capable of making a deep run in the tournament. The Hawkeyes were led by two-time All-American and expected Wooden national player of the year Luka Garza. Garza averaged 24 points per game this season, while converting 55 percent of his shots. He did not disappoint in the matchup against the Ducks, leaving it all out on the court as he put up a game-high 36 points. However, it was not enough to top the Ducks, who were hitting on all cylinders.

The Ducks had four of their five starters score double-digit points, led by guard Chris Duarte, who put up 23. They shot 56% as a team and hit 11 three-pointers, as the Hawkeyes could find no answers on defense. Oregon will now face Pac-12 rival USC in the Sweet 16, with the winner of that game advancing to the Elite 8 to face the winner of No. 1 overall seed Gonzaga and No. 5 seed Creighton.

The Oregon upset comes as one of many in a particularly upset filled March Madness. Among other unexpected outcomes are No. 15 seed Oral Roberts advancing to the Sweet 16 after defeating No. 2 seed Ohio State and No. 7 seed Florida, as well as three other double digit seeds: No. 11 Syracuse, No. 11 UCLA and No. 12 Oregon State, who all reached the Sweet 16. There will be many options for a Cinderella story to make a run deep into the tournament.