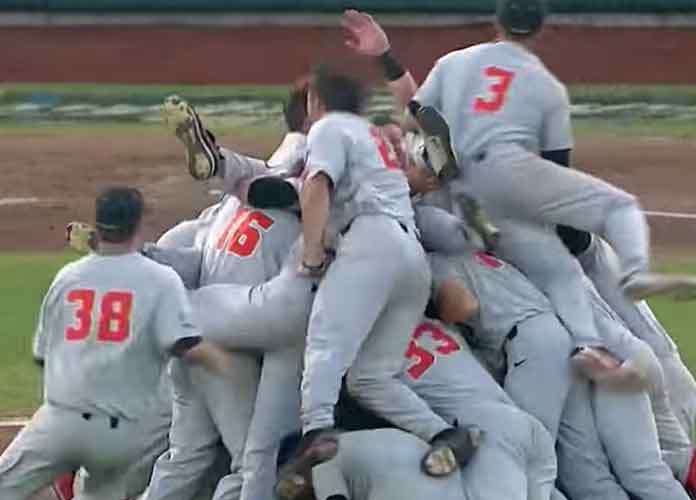 The Oregon State Beavers won their third national baseball title in program history on Thursday night after defeating the Arkansas Razorbacks 5-0 in the College World Series in Omaha, Nebraska.

Freshman starting pitcher Kevin Abel and sophomore catcher Adley Rutschman propelled Oregon State to its first national championship since 2007 with the win in the decisive third game of the World Series finals.

Abel tossed a two-hit shutout and finished with 10 strikeouts to earn the victory after throwing 129 pitches.

“I just kept making pitches and kept getting outs you know,” Abel told ESPN. “It felt better as the game went on and just kinda rode it out. You know I was gonna give it everything I had and I’m, I really appreciate that they let me go out there. It was a lot of fun.”

Meanwhile, Rutschman finished with 13 RBIs in the entire 2018 College World Series, the second-most in CWS history:

Adley Rutschman now has 13 RBI this CWS, tied with USC’s Robb Gorr in 1998 for 2nd-most in a single CWS.

Rutschman is also the first player with 17 hits in a single College World Series. pic.twitter.com/A2U91sefmA

The catcher was named CWS Most Outstanding Player after the victory at TD Ameritrade Park. The Beavers had lost the first game of the finals.

With an RBI single in the third inning, Rutschman also logged Oregon State’s 89th hit of the 2018 CWS. This shattered a record USC had held for 30 years.

After the Beavers jumped on top of each other in a seemingly endless dog-pile to celebrate the win, Abel carried the trophy while the Razorbacks remained stunned.