OPINION: Jim Boeheim Is Right About Melo And The Media - uSports.org 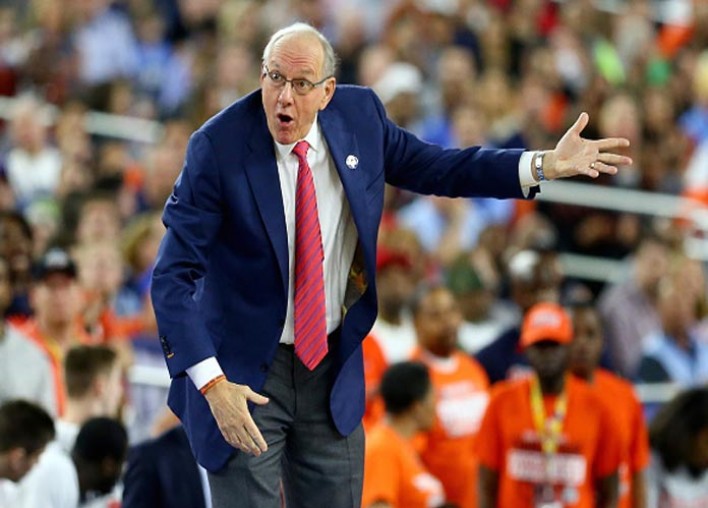 HOUSTON, TEXAS - APRIL 02: Head coach Jim Boeheim of the Syracuse Orange reacts in the second half against the North Carolina Tar Heels during the NCAA Men's Final Four Semifinal at NRG Stadium on April 2, 2016 in Houston, Texas. (Photo by Ronald Martinez/Getty Images)

OPINION: Jim Boeheim Is Right About Melo And The Media

Sometimes Jim Boeheim‘s response to reporters is more curt than it needs to be, but this time the situation is flipped. The media has taken a simple, honest comment by Boeheim out of context suggesting Boeheim meant an ‘unlikely’ championship run for Carmelo Anthony in a malicious way.

Boeheim has never liked the media and taking things out of context is one of the reasons why.

This shouldn’t be shocking to anyone. What Boeheim said is a fact. Despite the acquisitions of Joakim Noah, Derrick Rose and Courtney Lee combined with Anthony and Kristaps Porzingis, the Knicks aren’t going to beat the likes of NBA Champions Cavaliers or runners up Golden State Warriors.

Boeheim was made to seem like he was trying to take Melo down after his fourth Olympic appearance and third time winning gold, when in fact he was the one who convinced Melo to play for Team USA in Rio. Unless you read the Syracuse newspaper no one else chose to point out that according to Syracuse.com Boeheim said Melo was “the unquestionable leader on this team…I think he did a great job,” referring to Melo’s Olympic presence.

Perhaps some wonder why Boeheim even bothered to mention the fact that Anthony won’t win an NBA title, but the context in which it was said makes sense.

Boeheim went on-air with SportsCenter saying he hopes Melo wins a title, but was trying to make the statement that despite the fact that he hasn’t won one, he has still achieved greatness. Boeheim also wanted to clear the air so his children won’t be mad at him for saying Melo probably won’t win an NBA title.

I don’t think Boeheim has ever smiled so big for an interview.

Anthony was the second highest scorer on Team USA in Rio averaging 12.2 points per game and 5.3 rebounds per game.

“He was a really good leader on this year’s team,” Boeheim said. “When we were struggling there, he was a good voice in the locker room. He kept everybody together. We had so many new guys that weren’t used to, some of them hadn’t come off the bench in some time and it was a struggle for them, but everything came together.”

Boeheim felt it was important for Anthony to be on the Olympic team because the last couple years with the Knicks have been challenging and he wanted Melo to have a good experience and fill the leadership role Team USA was missing. A third Olympic gold can be a legacy Anthony leaves.

“He’s never been on a team that even had a remote chance of winning an NBA title. As a player, all you can do is try to make your team better and every team he’s been on he’s made them a lot better. Denver hadn’t done anything prior to him getting there and he took them into the playoffs. They weren’t going to beat the Lakers or the Spurs. In those years, they won the championship most of the time,” he said. “But he’s always made his team better. “It’s obvious. You look back on your total basketball experience and he had a great high school team, he won the NCAA championship and he’s won three gold medals in the Olympics. That’s a pretty good resume.”

This was likely the last time the two will pair up as coach and player. In 2020 for the Tokyo Olympics Anthony will be 36.

HOUSTON, TEXAS – APRIL 02: Head coach Jim Boeheim of the Syracuse Orange reacts in the second half against the North Carolina Tar Heels during the NCAA Men’s Final Four Semifinal at NRG Stadium on April 2, 2016 in Houston, Texas. (Photo by Ronald Martinez/Getty Images) 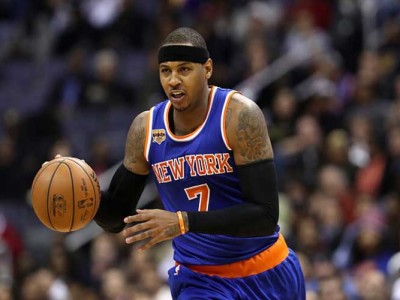 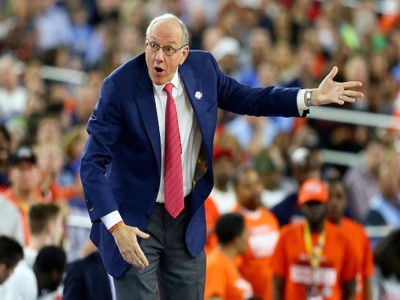 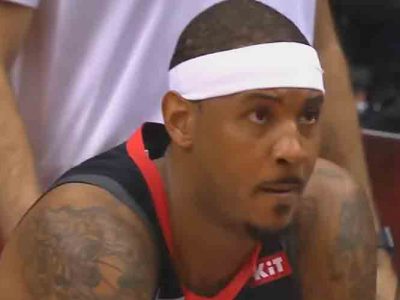