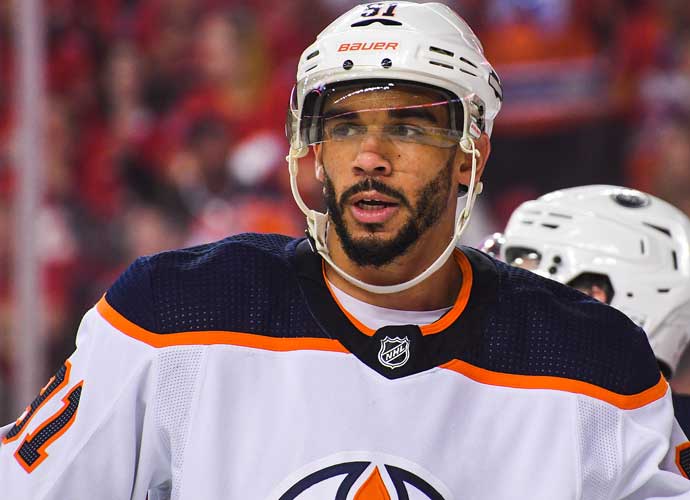 CALGARY, AB - MAY 26: Evander Kane #91 of the Edmonton Oilers in action against the Calgary Flames during Game Five of the Second Round of the 2022 Stanley Cup Playoffs at Scotiabank Saddledome on May 26, 2022 in Calgary, Alberta, Canada. The Oilers defeated the Flames 5-4 in overtime to win the series four games to one. (Photo by Derek Leung/Getty Images)

Edmonton Oilers forward Evander Kane suffered a scary injury Tuesday after a skate sliced him in the wrist in a game against the Tampa Bay Lightning. He will miss three to four months after receiving surgery to repair the damage.

Scary scene as Evander Kane gets cut by the skate of Pat Maroon pic.twitter.com/nnVmFrSRd0

Kane suffered the injury early in the second period after falling during a scrap with Tampa Bay defenseman Philippe Myers. As players converged for the puck, Tampa Bay forward Pat Maroon skated past and sliced Kane in an exposed area between his glove and jersey. The 14-year veteran bolted to his bench immediately, clutching his wrist in obvious pain while Maroon signaled frantically behind him for medical attention.

Kane was taken to a nearby hospital soon after and required surgery to repair the damage. The Oilers announced Wednesday that he will miss three to four months.

“Obviously last night was an extremely scary moment for me and I’m still in a little bit of shock,” Kane said on Twitter. “I would like to thank the entire training staff of the Edmonton Oilers and Tampa Bay Lightning, along with the all the doctors and paramedics who rushed to help treat and repair my injury. Without all of you, I know things would’ve been much worse and I’m sincerely grateful.”

On the mend, thank you 🙏 pic.twitter.com/8ZN7K5KAfc

In 14 games this season, Kane scored five goals and compiled eight assists after signing a four-year deal with Edmonton in the offseason. He was a solid contributor for the team in the postseason last year, scoring 13 goals. the most by any player in the playoffs. Before Edmonton, he played for the Atlanta Thrashers, Winnipeg Jets, Buffalo Sabres and San Jose Sharks.

The Oilers went on to defeat the Lightning 3-2 Tuesday to improve to 8-6 on the season and inch closer to the top of the standings in the competitive Pacific Division.

Obama Will Head Back To Georgia To Campaign With Sen. Raphael Warnock