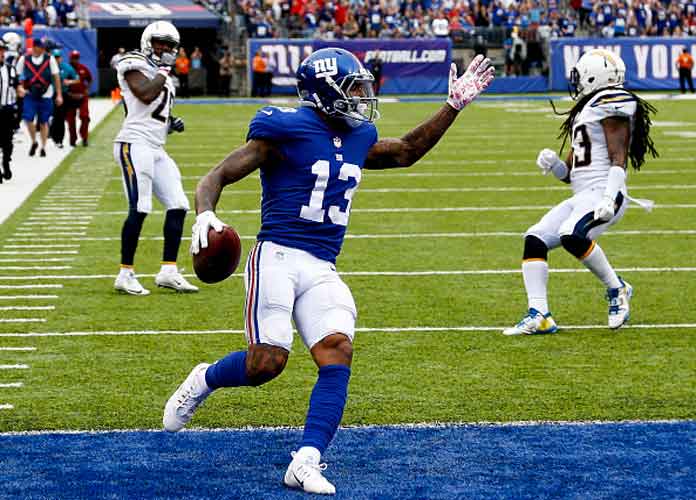 EAST RUTHERFORD, NJ - OCTOBER 08: Odell Beckham #13 of the New York Giants runs in for a touchdown during their game against Los Angeles Chargers at MetLife Stadium on October 8, 2017 in East Rutherford, New Jersey. (Photo by Jeff Zelevansky/Getty Images)

Odell Beckham Jr.’s status with the New York Giants continues to be a subject that raises many questions.

The temperamental wide receiver — who is entering his fifth season in the NFL — has stated he refuses to keep playing without a new long-term contract.

“Odell Beckham is not going to set foot on the field without a new contract agreed to, whether the Giants or whether anyone else,” NFL Network Insider Ian Rapoport reported.

Beckham, 25, is playing under the $8.46 million fifth-year option. Giants owner John Mara recently said no player is “untouchable” in a trade.

“I can’t answer that one way or the other,” Mara told reporters Sunday when asked if he could see a scenario in which Beckham isn’t with the Giants in 2018. “I mean we’re certainly not shopping him, if that’s what you’re asking (laughs). But when you’re coming off a season where you’re 3-13 and played as poorly as we played, I wouldn’t say anyone’s untouchable.”

Mara added that the team will always listen to trade overtures, although trading Beckham is “not a scenario I would like to see happen.”

Giants co-owner Steve Tisch, meanwhile, hopes a contract extension can eventually be reached to keep the wideout in New York, saying he and everyone in the organization wants the wideout to be “productive.”

“I would like for Odell and every other team member of Odell’s, every Giant player, to be on the Giants for as long as they contribute and have a role to play both in the locker room and on the field,” Tisch told reporters at the Annual League Meeting. “And Odell is certainly one of those players who I think has made and continues to make great contributions.”

Of course, the Giants could still exercise the franchise tag on Beckham in 2019 or 2020. Cleveland Browns wide receiver Jarvis Landry, Beckham’s former LSU teammate, said in a tweet he is eager to be reunited with his former college pal and fellow 2014 NFL Draft classmate: