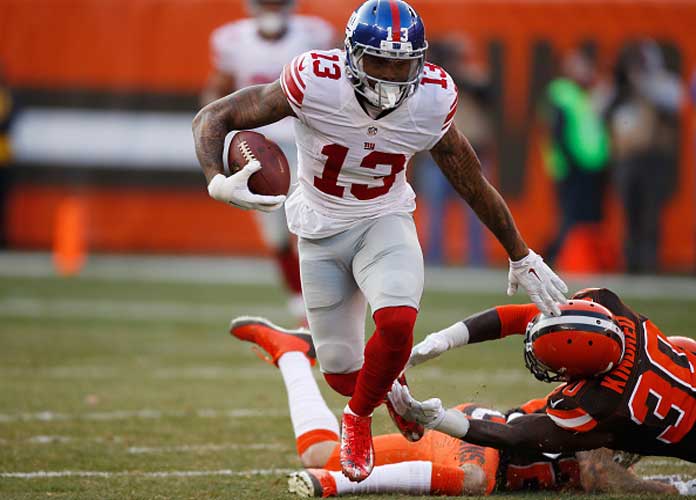 CLEVELAND, OH - NOVEMBER 27: Odell Beckham #13 of the New York Giants avoids a tackle by Derrick Kindred #30 of the Cleveland Browns during the fourth quarter at FirstEnergy Stadium on November 27, 2016 in Cleveland, Ohio. (Photo by Gregory Shamus/Getty Images)

The New York Giants held organized team activities on Thursday — the first one open to reporters — and were missing two of their greatest stars: Odell Beckham Jr. and Olivier Vernon.

Odell Beckham Jr. not at Giants voluntary OTAs. Neither is Olivier Vernon. Beckham’s original plan was to be here Thursday.

It remains unclear why defensive end Vernon was not present at OTAs, where attendance is voluntary.

Beckham was reportedly set to attend workouts Thursday after missing the first OTAs, which the Giants held on Monday. The reason for the wide receiver — who is entering his fourth season with the team — missing the opening days of OTAs is also unknown, though some speculate it may be related to OBJ’s signing a record five-year shoe contract with Nike on Tuesday, a deal reportedly worth around $29 million with additional incentive clauses.

In all, the pact could pay 24-year-old Beckham up to $48 million over eight years, according to ESPN’s Darren Rovell. This is more than twice the value of any shoe deal Nike has ever dealt to an NFL player.

The shoe deal the wideout signed with Nike upon entering the league in 2014 recently expired.

“It was a long process,” Beckham’s agent, Zeke Sandhu, said of the shoe-deal talks to ESPN. “This proved he’s an icon.”

The receiver also made news earlier this week by hanging out with disgraced former Cleveland Browns quarterback Johnny Manziel.

Beckam — a former first-round pick out of LSU — is scheduled to make just over $1.8 million with the Giants next season before his fifth-year option sets in for 2018, which would raise his earnings to about $8.5 million.

“I will be working harder than I ever have, to be the best that I ever have been. I’m more motivated now then I have ever been,” Beckham tweeted in April shortly after that was announced.

Vernon, a 2012 third-round draft pick out of the University of Miami, played four seasons with the Dolphins before signing an $85 million five-year deal with the Giants in 2016, the same year he was voted Second-team All-Pro.

The 26-year-old defensive end reportedly spent around $300,000 on custom engraved bottles of cognac as Christmas gifts for the Giants — both players and coaches — in December.

Olivier Vernon’s gifting of Louis XIII bottles for every member of the Giants was one of the largest purchases in the brand’s history pic.twitter.com/ctxpeaF9NY

Giants coach Ben McAdoo — who led the Giants to an 11-5 record in his first season in charge last year, the team’s best run since winning the Super Bowl in 2012 — is set to address the media later today.

CLEVELAND, OH – NOVEMBER 27: Odell Beckham #13 of the New York Giants avoids a tackle by Derrick Kindred #30 of the Cleveland Browns during the fourth quarter at FirstEnergy Stadium on November 27, 2016 in Cleveland, Ohio. (Photo by Gregory Shamus/Getty Images)