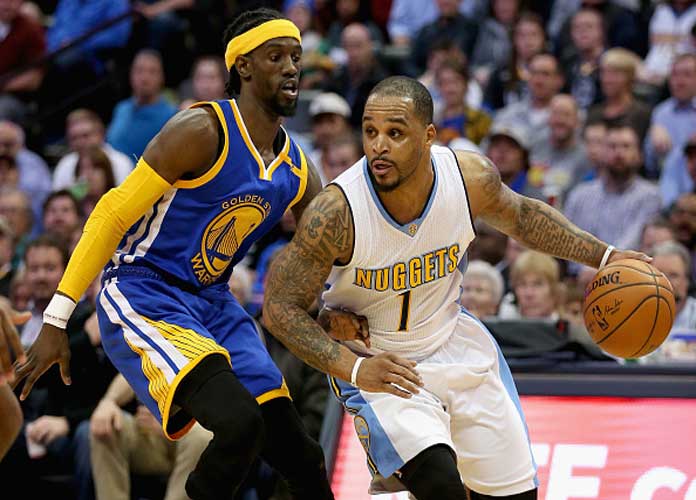 DENVER, CO - FEBRUARY 13: Jameer Nelson #1 of the Denver Nuggets drives against Briante Weber #2 of the Golden State Warriors at the Pepsi Center on February 13, 2017 in Denver, Colorado.

The Golden State Warriors have proven themselves to be one of the most difficult teams to beat in the NBA, but the Denver Nuggets found a way to do it, and all while matching a league record.

The Nuggets (25-30) tied an NBA record by scoring 24 3-pointers en route to a thunderous 132-100 home victory over the Warriors on Monday night.

”Once we saw a few go in, we just wanted to keep going, see how many we could hit,” Will Barton said.

The sellout crowd at the Pepsi Center was in for an exciting game indeed.

”We just wanted to get after them, challenge them on offense and defense. It just so happened that we hit a lot of 3s. So, we just kept rolling with it,” Barton said. ”But we never come into a game, especially with a team like that and just want to outshoot them from beyond the arc because that’s what they do.”

The Warriors, meanwhile, were left stunned, and were only able to sink 8 of 32 3-pointers.

Even two-time MVP Stephen Curry struggled to keep up with Denver’s impressive long-range shooters, finishing 1 of 11 from beyond the arc.

”I felt confident, every shot I took felt like it was going in,” said Curry, who scored 11 points. ”Just got served a humble slice of cupcake.”

The only Nuggets player who didn’t record a 3 was Nikola Jokic, although the Serbian power forward– who will be 22 on Sunday– did set career highs with 12 assists and 21 rebounds along with 17 points in his second career triple-double.

Denver tied the 3-point record set by Houston in December against New Orleans when rookie Juan Hernangomez scored his sixth three at the 2-minute mark.

”Yeah, we knew it at the end,” Gary Harris said. ”We were trying to get one more.”

However, their final two 3-pointers in the last minute rattled out, and Jamal Murray opted to dribble out the clock rather than shoot one last uncontested 3. The Nuggets finished 24 of 40 from beyond the arc.

He kept hoping the Nuggets would eventually slow down, but they never did.

”I thought they would. They were playing confident and free,” Durant said. ”They had nothing to lose, especially missing some of their guys.”

The Warriors (46-9) had won three straight and eight of their previous nine games. Monday’s loss also marked their biggest defeat since a 129-100 blowout loss to the Spurs in the season opener.

”It was one of those nights they had everything going, they were on fire and we couldn’t get much going ourselves,” Warriors coach Steve Kerr said. ”We looked kind of gassed out there.”

The Nuggets next host the Minnesota Timberwolves on Wednesday, in what should mark new trade Mason Plumlee’s first game in a Denver uniform.

Golden State will host the Sacramento Kings on Wednesday.

DENVER, CO – FEBRUARY 13: Jameer Nelson #1 of the Denver Nuggets drives against Briante Weber #2 of the Golden State Warriors at the Pepsi Center on February 13, 2017 in Denver, Colorado.