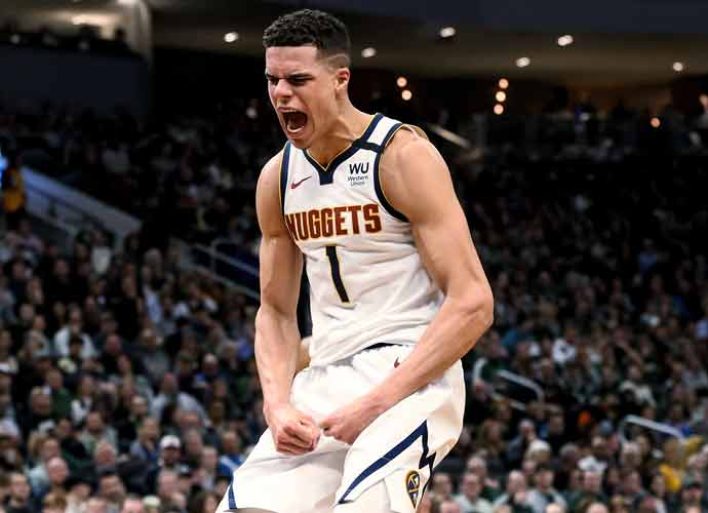 MILWAUKEE, WISCONSIN - JANUARY 31: Michael Porter Jr. #1 of the Denver Nuggets celebrates in the third quarter against the Milwaukee Bucks at the Fiserv Forum on January 31, 2020 in Milwaukee, Wisconsin.

During a Snapchat Q&A, Nuggets forward Michael Porter Jr. claimed that COVID-19 was a conspiracy meant to control the world’s population. “Personally, I think the coronavirus is being used obviously for a bigger agenda,” Porter, 22, said on Snapchat. “It’s being used for population control in just terms of being able to control the masses of people. I mean, because of the virus the whole world is being controlled. You’re required to wear masks. And who knows what will happen when this vaccine comes out? You might have to have the vaccine in order to travel. Like, that would be crazy.”

Porter Jr. was reportedly reprimanded by Nuggets exec Tim Connelly. Connelly did not release a statement about Porter Jr.’s comments or their conversation, but Nuggets head coach Mike Malone spoke to reporters on Wednesday and supported Porter Jr’s right to free speech. “Obviously, I’m not the thought police. I’m not going to tell any of our players what they can and can’t say. All I would say is just be sensitive to the current situation in our country and throughout the world in regards to coronavirus,” Malone said. “Michael Porter and any other player on our roster, they’re entitled to their opinions and ability to have free speech, and I will respect that as long as it doesn’t become a distraction. What Michael stated, being around our players this morning at breakfast and practice, has not become a distraction at all.”

There have been some bad looks coming out of the NBA bubble most notably perhaps the NBA player most prone to poor behavior, Dwight Howard, questioning why payers had to wear masks on campus and having been disciplined for not wearing one while around other people.