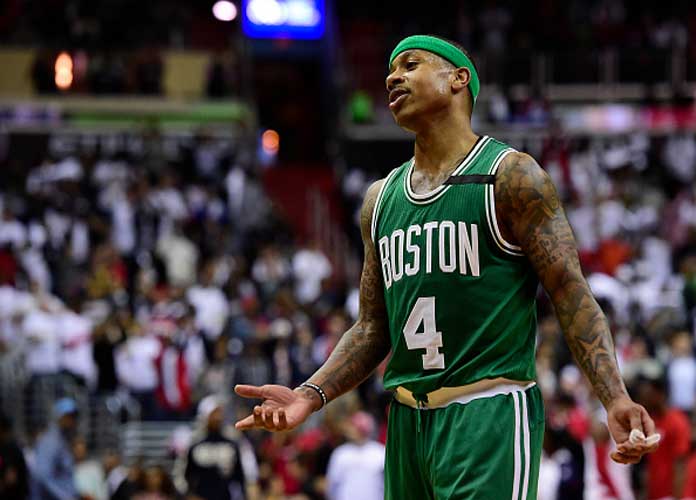 WASHINGTON, DC - MAY 07: Isaiah Thomas #4 of the Boston Celtics reacts after a call in the second half against the Washington Wizards in Game Four of the Eastern Conference Semifinals at Verizon Center on May 7, 2017 in Washington, DC.

Isaiah Thomas apologized after insulting the city of Cleveland on social media on Saturday.

The Denver Nuggets point guard, who briefly played for the Cavaliers last season, said in an Instagram live video that Cleveland was a “s—hole” and added “I see why Bron left. Again.”

“[Sacramento,] LA and Boston was all love,” said Thomas in the video. “Phoenix was cool.”

IT speaks his mind: “Cleveland was a sh*thole. I see why Bron left. Again.”

Thomas was of course referring to LeBron James, who signed with the Los Angeles Lakes last month after spending four years with the Cavs.

After facing strong backlash for his comments, Thomas apologized.

“I shouldn’t have said that,” Thomas stated. “That was my fault. Cleveland was actually cool, it was all right. The situation just wasn’t the best. I apologize for saying it was a s—hole. It wasn’t a s—hole. The team was dope, the players was filthy. My guy Gio. Training staff was cold. Nah, Cleveland was cool. I shouldn’t have said that, that was my bad. I was just talking on IG Live, I didn’t think it was gonna get to where they’re posting it. It’s like damn, my bad.”

I apologize for my choice of words about Cleveland. I was on my live playing around. They don’t show you everything for a reason smh. Right after that I clarified what I said…. All love to everybody who had love for me in Cleveland.

The Cavaliers traded Thomas and Channing Frye to the Lakers on February 8, just six months after Thomas landed in Cleveland. Thomas then signed a one-year deal with the Nuggets on July 16.

During Thomas’s brief stint with the Cavs, reports surfaced about tensions between him and other players on the team like Kevin Love. Therefore, it isn’t entirely surprising that Thomas was mad at the city, which hadn’t won a major sports title in over 50 years until the Cavaliers won the NBA championship in 2016.

One person who took offense to Thomas’s remarks was ESPN’s Jalen Rose, a Cleveland native.

“Yes, us midwesterners we like pop and coney dogs, and we actually talk to our neighbors,” said Rose. “But you can’t tell me that being in Cleveland was a worse experience than being in Sacramento, a team that hasn’t made the playoffs and hasn’t developed the lottery pick since I don’t know when.”

Rose then noted that the Cavaliers have had much more success as a team than the Kings have in recent years, partly because James played for them.

Ryen Russillo added of Thomas: “He’s got to get over the Cleveland thing,” although he also said he “sympathized” with the veteran point guard.