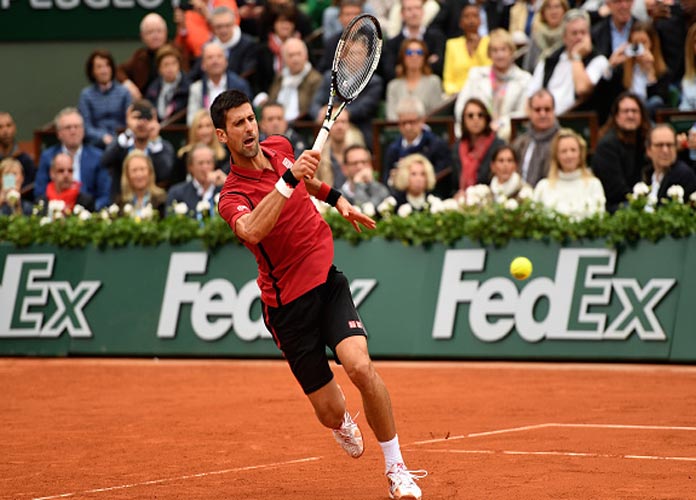 PARIS, FRANCE - JUNE 05: Novak Djokovic of Serbia hits a forehand during the Men's Singles final match against Andy Murray of Great Britain on day fifteen of the 2016 French Open at Roland Garros on June 5, 2016 in Paris, France. (Photo by Dennis Grombkowski/Getty Images)

World No. 1 Novak Djokovic broke a Rod Laver record on Wednesday by defeating Frenchman Adrian Mannarino in the second round at Wimbledon, thus earning his 30th consecutive Grand Slam victory.

Djokovic beat Mannarino– who turned 28 on Wednesday– 6-4, 6-3, 7-6 (7/5). Unhindered by the rain, the Serb teased Mannarino and the crowd by starting with a 15-40 deficit in his opening service game. Djokovic hurtled after a drop shot during the tie-break, and lay on his back for a few moments.

“The record that I managed to break today is one of the better ones because as a professional tennis player, you always aim to play your best in Grand Slams,” said 29-year-old Djokovic, who holds all four Grand Slam titles. “Knowing that I won 30 in a row, it’s very pleasing. I want to keep on going. Let’s see where it takes me.”

His victory over the World No. 55 Frenchman came in two hours and five minutes, and was littered with eight double faults, the last of them coming when he was broken serving for the match at 5-4 in the third set. Djokovic was patient, however, securing the first set after Mannarino netted a backhand.

Djokovic, who is seeking a third straight title at the All England Club, will next face American 28th seed Sam Querrey, who defeated Brazilian Thomaz Bellucci in the second round also on Wednesday. Querrey and Djokovic will play on Friday for a spot in the last 16.

Also under the Center Court roof, Polish third seed Agnieszka Radwanska advanced to the next round with a 6-2, 6-1 win over Ukraine’s Kateryna Kozlova to keep her record of never having lost in the first round at Wimbledon. Radwansk, the 2012 runner-up, will next face Croatian Ana Konjuh.

Willis, the World No. 772 who makes his living coaching children and senior citizens at a rowing club in the English midlands, had never played a tour match before Wimbledon. The strong lefty, nicknamed ‘Cartman’ after a stout character from cartoon series ‘South Park,’ found himself facing one of the best players in the world, a man who had won 79 matches more than him at the All England Club.

The two come from very different worlds: Federer has career earnings just shy of $100 million, while Willis has only earned $200 this year and still lives with his parents.

Willis was far from embarrassed by Federer despite shipping the first set in just 24 minutes.

“Marcus brought some unbelievable energy to the court with the fans, his play and his personality as well,” said 34-year-old Federer who next faces Britain’s Dan Evans. “It was very refreshing.”

PARIS, FRANCE – JUNE 05: Novak Djokovic of Serbia hits a forehand during the Men’s Singles final match against Andy Murray of Great Britain on day fifteen of the 2016 French Open at Roland Garros on June 5, 2016 in Paris, France. (Photo by Dennis Grombkowski/Getty Images)