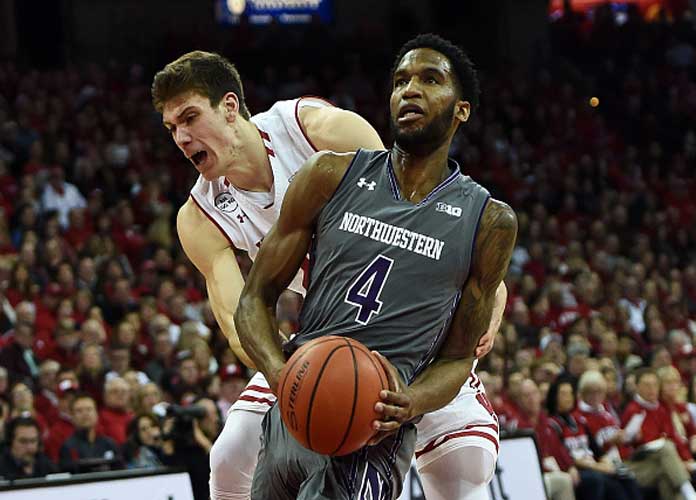 MADISON, WI - FEBRUARY 12: Vic Law #4 of the Northwestern Wildcats is fouled by Ethan Happ #22 of the Wisconsin Badgers during the first half of a game at the Kohl Center on February 12, 2017 in Madison, Wisconsin. (Photo by Stacy Revere/Getty Images)

The Northwestern Wildcats pulled off a thrilling victory over Michigan on Wednesday night thanks to a spectacular last-second play that drove the crowd at Welsh-Ryan Arena in Evanston wild with joy.

With 1.7 seconds remaining, Northwestern senior forward Nathan Taphorn tossed a lobbing pass the full length of the court to sophomore center Dererk Pardon, who caught the ball right under the basket and scored a layup at the buzzer to lift the Wildcats to a 67-65 home win over the Wolverines.

The home crowd immediately jumped their feet and stormed the court in jubilation. The victory also gave Northwestern its first winning record in the Big Ten Conference since 1967-68 and its first 10-win season in the conference since 1932-33, according to ESPN.

That was the day of FDR’s first inauguration … been a while. pic.twitter.com/UsMPnDN2KP

“I was looking around, I didn’t have anyone to hug. …I was looking for my family because it was a (pauses) special moment,” said Northwestern coach Chris Collins, choked up and emotional. “It was surreal the way it happened. It’s almost kind  of fitting when you’re trying to do something really hard. It takes exceptional things. …There’s always some luck involved. Guys got in the right spots. And Nate threw a great pass. Don’t the (Chicago) Bears need a quarterback.”

Pardon said he was stunned the play actually worked.

“This was just amazing for us and this program,” Pardon said. “I thought it was long, thought it was going out of bounds at first. When I caught it, I was like, ‘the rim is right there.’ We’ve never practiced that.”

Taphorn, meanwhile, said the following of the highlight-reel play, which was drawn up by assistant coach Brian James: “I just had to put my trust in Dererk. …My goal was to find him and give him the biggest hug ever.”

Although nothing is official until Selection Sunday, the momentous victory had several analysts stating the Wildcats (21-9, 5th in Big Ten) could make a legitimate run at this year’s national title.

Northwestern next host Purdue (24-6) on Sunday, while Michigan will visit Nebraska that day.

MADISON, WI – FEBRUARY 12: Vic Law #4 of the Northwestern Wildcats is fouled by Ethan Happ #22 of the Wisconsin Badgers during the first half of a game at the Kohl Center on February 12, 2017 in Madison, Wisconsin. (Photo by Stacy Revere/Getty Images)