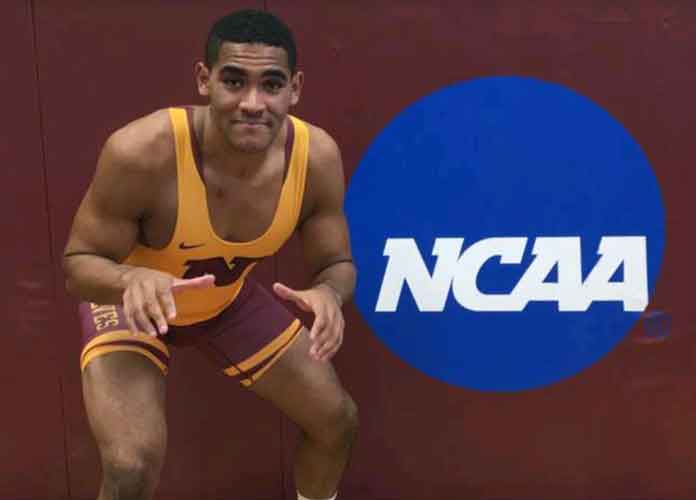 Justice Horn is not your ordinary wrestler, and he is hoping to help show that the sport is progressively changing each year.

The 20-year-old member of South Dakota’s Northern State University Wolves wrestling team is not only a team standout: he is also openly gay. Horn, a Missouri native, sat down with uSports for an exclusive discussion of his experience coming out to his family, friends, coaches and other people around him.

“What really made me feel safe is when I got feedback from other wrestlers and people in the wrestling community,” 6-foot, 285-pound Horn explained. “That meant a lot more to me because wrestling is very important to me and it just shows that our community really is welcoming. Although I got positive feedback on all spectrums, it just mattered a lot more to see it come from people I can relate to and that also love the sport.”

The son of an interracial couple — something he told the Huffington Post his parents “were targeted for” during his upbringing — revealed he came out to his teammates before his family, although everyone around him was very supportive. In discussing words of wisdom to other gay athletes struggling with revealing their true natures to the community around them, Horn insisted that a truly great sports team will generally care much more about your efforts and ability as an athlete than about a given player’s personal life.

“My advice [to other gay athletes] is just to be focused on your athletics and that if you have the talents and the skills, your teammates are going to love you and only really care about that,” he said. “A lot of teams and a lot of coaches just care about how you play and that’s all it is.”

Horn cited former Missouri football defensive end Michael Sam — the first openly gay player in the Canadian Football league — as an inspiration. Sam came out in 2014 and played for the Montreal Alouettes in 2015, and also played as a practice squad member for the Dallas Cowboys and then-St. Louis Rams. Horn said he also looked up to U.S. Olympic wrestler Jordan Burroughs as a kid.

Horn comes from a family of athletes: one of his uncles was an even NFL player, and two others were college coaches. Horn said he initially considered playing football.

“I was primarily playing football and that’s really what my interest was,” he said. “I was going to go to college for football but they told us ‘if you want to see varsity time and be a better football player, you should get into the sport of wrestling. But because of football I would have concussions and I would have to later drop that sport so then I would have to focus on wrestling.”

Horn explained what he hopes more people understand about wrestling and clarified some misconceptions about the sport.

“What I want for people to get is that its a tough and very intense sport,” he said. “It’s not like a one-game thing. Wrestling is a 24-7 thing and it is honestly a lifestyle.”

“You have to make sure you’re doing extra practice to watch your weight. Honestly, to be a better wrestler you need to stay on the mat and keep doing more.”

Horn finished off with a very memorable phrase.

“There’s a lot of stuff that goes on behind the scenes. And it’s not all pretty.”