Northern Illinois Next In Line For Holiday Bowl Vs WSU If Minnesota Boycotts Game - uSports.org 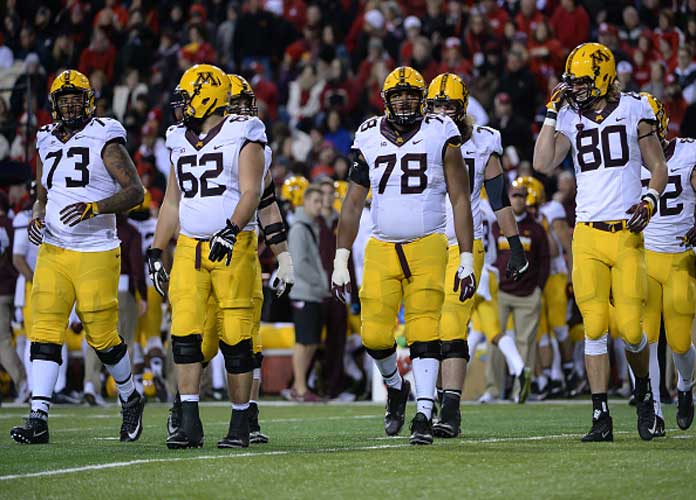 The entire Minnesota Golden Gophers football team walked out of the locker room and onto the practice facility turf on Thursday night to speak to a group of reporters.

Donning their maroon and gold jerseys, all the players lined up behind 10 of their teammates who were suspended earlier this week following an internal university investigation into an alleged sexual assault.

Three senior leaders stood before the press and stated their discontent with the university’s decision, saying they would boycott any football activities until Minnesota’s president and athletic director apologized and revoked the suspensions.

Senior receiver Drew Wolitarsky said the boycott was a “day by day” matter, but did not rule out the possibility that it might extend to the Gophers’ Holiday Bowl game against Washington State on Dec. 27.

If the boycott continues, however, the Holiday Bowl will need to find a new team to play the Cougars, and according to several reports, including one from ESPN.com’s Brett McMurphy, the Northern Illinois Huskies of the MAC would be the next in line for a bowl bid based on NCAA APR scores.

Northern Illinois traveled to San Diego, Calif., for its bowl game last season, when it lost to Boise State in the Pointsettia Bowl, but it has never played in the Holiday Bowl.

McMurphy wrote late Thursday that Northern Illinois, which finished the regular season 5-7, would “likely” accept an invitation to play in the Holiday Bowl if a decision is reached within the next 48 hours, by Saturday night.

According to police records, a woman told officers she was drunk when she was sexually assaulted in Minnesota running back Carlton Djam’s apartment on Sept. 2 by several men, including some of the suspended players. She said her sexual contact with two men may have been consensual, but her contact with four of them was not. Several players told police it was consensual, and an investigator who watched a video Djam took of the incident wrote that “she does not appear to be upset by the sexual activity and does not indicate that she wants it to stop … and the sexual contact appears entirely consensual.”

Four players were suspended earlier in the season for three games after becoming part of the investigation. No arrests were made, no charges were filed, and a restraining order filed by the woman was lifted by a judge following a settlement on Nov. 2.

This week, however, the school’s Office of Equal Opportunity and Affirmative Action recommended suspending those four players and six others, saying they violated school conduct standards.

All 10 Gophers have been suspended from the team indefinitely.

While prosecutors need to be able to prove a criminal case “beyond a reasonable doubt” to get a conviction, the university uses a lower standard of proof for alleged violations of its student code, requiring only that it is more likely than not that a violation occurred.

“Our leaders make these decisions with the interests of our entire community in mind, regardless of timing or competitive considerations,” school President Eric Kaler recently said in a letter to boosters.

With regards to Minnesota’s football boycott, Holiday Bowl executive director Mark Neville said the bowl’s committee was “monitoring it closely.” A request for comment from the Big Ten was not returned.

Minnesota’s players were asked about the possibility of the school revoking scholarships for their demonstration, and Wolitarsky did not seem concerned.

“We’re in this together,” Wolitarsky said. “What, are they going to pull 120 guys off the team? I mean, they’re not going to have a team if that’s the case.”

The Holiday Bowl is one of the most lucrative and well-known of the second-tier bowl games. The payout to each school was $2.8 million last year. Washington State sold out its 7,000-ticket allotment in less than two days and has already requested more.