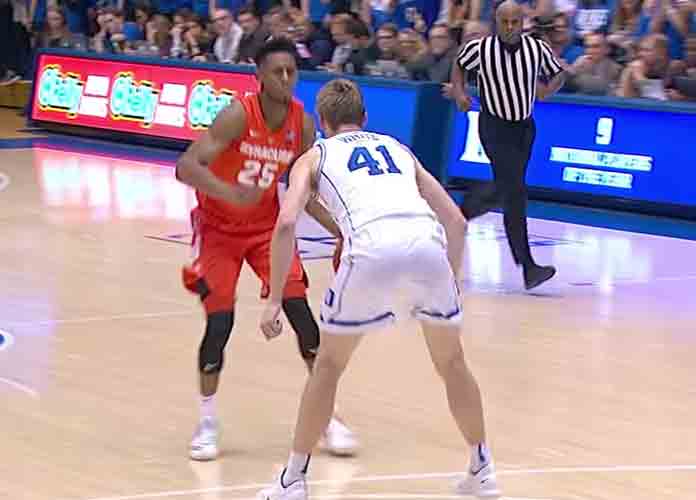 Monday night seemed doomed for Duke from the start. The night began with two Blue Devils starters going down with injuries, most notably Tre Jones, who separated his AC joint going for a loose ball.

With Jones on the court, Duke has forced over 200 turnovers. Without him, they’ve forced just 59. Last night, the struggles began to appear as RJ Barrett stepped up as an initiator. The team struggled to create offense out of their defense and advance-pass the ball.

Struggling to replace both guard Jones and forward Cam Reddish, Duke maintained a respectable 49-45 lead going into the half. Then, a last-minute heave from behind half court by Syracuse forward Elijah Hughes became a first-half buzzer beater and the 49-45 lead shrunk to 49-48.

“When that shot went in, it just showed what kind of night it was for them. It seemed like everything they threw up was just bottom of the net. They just hit a lot of shots,” Duke star Zion Williamson said.

As many point to Houston Rockets guard James Harden as the next evolution of basketball, Duke finds themselves following in lockstep. Williamson was forced to play nearly the entire game, setting a new season high by seven minutes.  He’d also walk away with the Duke freshman record for most points in a game with 35.

Like the Rockets, the team also fell in love with three-pointers. Williamson launched 2.3 times his normal amount from behind the arc, yet drained only one. Barrett struggled as well, going 4-for-17 in the game. Duke as a team shot 43 threes but scored only nine in the game.

The No. 1-ranked Duke was 104-0 at Cameron Indoor Stadium when in that spot, excluding rival North Carolina. It was their first home loss since 2006. The next power rankings will likely see Duke drop out of the top spot.

“The game plan was to have Tre Jones and Cameron Reddish,” Duke coach Mike Krzyzewski said. “When you get two guys hurt, there is no game plan anymore. It’s a period of adjustment. You’re trying to find ways to win.”

The game may have been an entirely different story had Jones not been injured. In the six minutes he played, Jones pulled in four steals and altered Syracuse’s shooting. The team went just 1-for-7 with Jones on the court. It also didn’t help that Reddish’s replacement went 0-for-10. Jones is out indefinitely. Reddish should return for Saturday’s home game against No. 4 Virginia.