Who Is Nick Foles? Facts To Know About Eagles QB And Super Bowl LII MVP - uSports.org 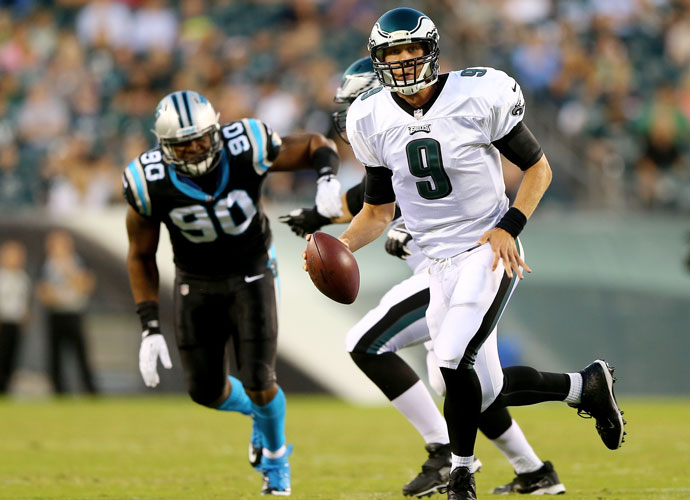 PHILADELPHIA, PA - AUGUST 15: Nick Foles #9 of the Philadelphia Eagles scrambles with the ball as Frank Alexander #90 of the Carolina Panthers defends on August 15, 2013 at Lincoln Financial Field in Philadelphia, Pennslyvania. (Photo by Elsa/Getty Images)

Who Is Nick Foles? Facts To Know About Eagles QB And Super Bowl LII MVP

Nick Foles not only helped lead the Philadelphia Eagles to their first-ever Super Bowl victory in the modern era, but the quarterback was also named the game MVP.

The 29-year-old won the hearts of millions when he called his wife Tori (the younger sister of former NFL tight end Evan Moore) “his life” and also held his baby daughter Lily in his arms before accepting the Vince Lombardi Trophy from NFL commissioner Roger Goodell.

Foles was drafted by the Eagles as a third-round pick out of Arizona in 2012, and played with Philadelphia (where he started some games) for three seasons before joining the then-St. Louis Rams and Kansas City Chiefs for one-year stints on each team.

Just over two years ago, backup QB Foles was prepared to retire from football age 26 after feeling frustrated with a string of poor performances.

On Sunday, he out-dueled Tom Brady, his New England Patriots counterpart who was called the “GOAT” (Greatest of All Time) after he led the Pats last year to their fifth Super Bowl title since 2001 in an amazing comeback win over the Atlanta Falcons.

Foles put up some impressive stats on Sunday: he threw for 373 yards and three touchdowns in the Eagles’ 41-33 victory in Minneapolis. He even added a 1-yard TD catch on a trick play. The Austin, Texas native replaced Eagles QB Carson Wentz as starter after the standout passer injured his knee late in the regular season.

“The stage is never too big for him,” tight end Zach Ertz — who caught the game-winning touchdown pass — of Foles.

“I didn’t have to be Superman,” Foles said. “I have amazing teammates.” His daughter Lily donned a green Eagles scarf Rosie-the-Riveter style across her head and pink noise-canceling “Beats by Dre” headphones. After Foles pulled a silver chain out from underneath his jersey, Lily began playing with the cross at the end of it.

Among Foles’ amazing passes were a 34-yard lob to Alshon Jeffrey and a 22-yard bullet to Corey Clement.

Foles originally committed to Arizona State but then decided to attend Michigan State. He ultimately transferred to Arizona. The QB is a Christian, and was one of several Eagles players to thank God for allowing the team to finally earn a Super Bowl ring. “All glory to God,” he said.

PHILADELPHIA, PA – AUGUST 15: Nick Foles #9 of the Philadelphia Eagles scrambles with the ball as Frank Alexander #90 of the Carolina Panthers defends on August 15, 2013 at Lincoln Financial Field in Philadelphia, Pennslyvania. (Photo by Elsa/Getty Images)