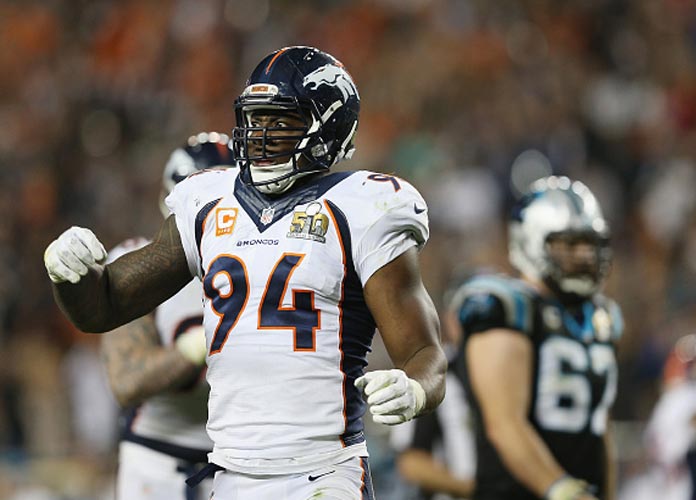 DeMarcus Ware was one of several NFL players injured in a Week 2 game this weekend.

The Denver Broncos outside linebacker suffered an ulna fracture near his elbow during his team’s 34-20 home victory over the Indianapolis Colts on Sunday.

Ware, 34, cradled his arm as he walked to the sideline just one minute into the third quarter and was taken to the locker room. The play, an 11-yard scramble by Colts quarterback Andrew Luck, was nullified by  a holding penalty on Indianapolis tight end Jack Doyle.

The veteran linebacker will undergo surgery to repair a broken bone in his right forearm, and will miss four to five weeks, Broncos coach Gary Kubiak told reporters.

Ware missed much of the team’s offseason program, all of training camp and did not play in any of the Broncos’ four preseason games because of back troubles. Denver made that move to try to get him to the regular season and planned to regulate his snap count during games to try to keep him healthy.

Thanks for all the well wishes to a speedy recovery. Looking forward to being back out there with my guys. #Broncos pic.twitter.com/aplgCihoDT

Ware had split a sack with fellow linebacker and Super Bowl 50 MVP Von Miller earlier in the game, thus putting himself in sole possession of ninth place in NFL history with 136.5 career sacks. He now has 19.5 quarterback takedowns in 28 regular-season games with the Broncos.

The Broncos will next travel to Cincinnati to play the Bengals on Sunday.

Cleveland Browns quarterback Josh McCown is also out this week with a shoulder injury, and is week-to-week “from here on,” coach Hue Jackson told reporters. Rookie Cody Kessler is expected to start in place of McCown. Cleveland defensive end Carl Nassib, meanwhile, suffered a broken hand in the loss to the Baltimore Ravens on Sunday. Nassib is expected to have surgery. Offensive lineman Cameron Erving (pulmonary contusion), meanwhile, was released from the hospital on Monday morning, the team announced. He’s considered week-to-week.

New Orleans Saints corner P.J. Williams suffered a concussion after taking a knee to the head. Rapoport reported that it is believed Williams escaped without a spine injury. Coach Sean Payton announced the corner “will be coming back (Monday) afternoon” and “all the news is positive.”